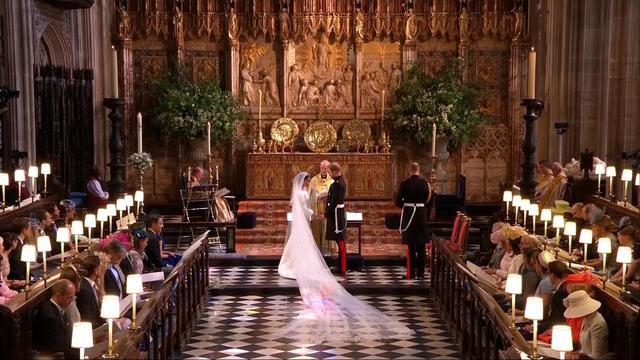 Prince Harry and Meghan Markle are officially the Duke and Duchess of Sussex. CBS News had extensive live coverage of the royal wedding between the British prince and the American actress anchored by "CBS This Morning" co-host Gayle King and "Entertainment Tonight's" Kevin Frazier from Windsor Castle. They were joined by Tina Brown, author of the "The Diana Chronicles," and Penny Junor, author of "Prince Harry: Brother, Soldier, Son," as well as by Majesty magazine editor-in-chief Ingrid Seward and others who offered analysis of the day's festivities.

Here are some of their favorite moments from Harry and Meghan's big day:

"I liked when she walked down the aisle and Prince Harry looked at her. Either he said 'You look like a princess', 'You're amazing' or 'You look amazing.' But I always love the moment between a couple when they look at each other for the first time. I love that. Lip readers in the audience, please tell me what he's saying. I love his smile. I love her smile back at him. I love that. And when he took the veil back off of her face. I love that," Gayle King said.

"When that carriage finally got to the end of the long walk that she took a breath and you saw her grab her chest. She was like 'Oh my God ... this is crazy.' That was so real. That was a great moment. Because then we understand what it felt like for her. It just, I could watch that as a meme over and over again. Dreams do come true," Kevin Frazier said.

"I did love the moment when he takes the veil off her. It's a kind of mystery moment when the beautiful face is revealed and he looks right into this woman that he loves. I absolutely did love that...I loved the procession, too. I never expected to love the carriage ride as much as I did. But that was the moment to me when it really became this thrilling, off-the-cuff, you know, not so planned and everything else but almost the most thrilling thing," Tina Brown said.

"I just loved looking at those faces when the preacher was doing his number. They were all on the verge of giggles and utterly sort of shocked by what was -- it was so un-British," Penny Junor said, referring to the Most Rev. Michael Curry's  impassioned speech on the power of love.

"I loved the moment when Meghan's mum Doria was really fighting back her tears. And it was so emotional. ... Her face just felt for everything about that ceremony. And when the Prince of Wales took her hand and guided her," Ingrid Seward said.