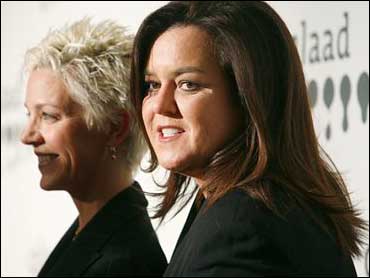 It appears that Rosie O'Donnell is itching to leave her post on "The View." She's due to leave the chat fest in June.

After going head to head with Elisabeth Hasselbeck about terrorism on Monday, O'Donnell wrote an entry on her blog in which she says she must focus.

"a senior in highschool, its sunny and i wanna stay home, be done, move on," she wrote Monday. "gotta kill the questions for a while, the end is always rocky, one must focus."

Since announcing her departure from the show, O'Donnell seems to have taken pleasure in stirring up more debates on the talks show. She frequently notes on the show that she only has a few more weeks to go.

Also on Monday, O'Donnell announced that she wouldn't be attending the Emmy Awards with her cohosts June 15. The show was nominated for 10 awards in March, including best talk show and best talk show hosts.

"I'm not going to be able to go to the Emmy awards with you ladies because we have a big school thing that weekend and the graduation from his grade is a big to-do," O'Donnell said.

"If we win one, I mean, I think we're all wonderful but this was your year with us and it makes me very sad that you're not going to be there," her cohost Barbara Walters said Monday.

O'Donnell told Walters that if "The View" does win the Emmy for best cast "all the credit goes to you for hiring me." The show has never won the best cast award.

"If we win, it's because of all of us," cohost Joy Bahar chimed in.

O'Donnell announced that she would be leaving the ABC show in April. The comedian joined the show in September and cooked up a very controversial season.