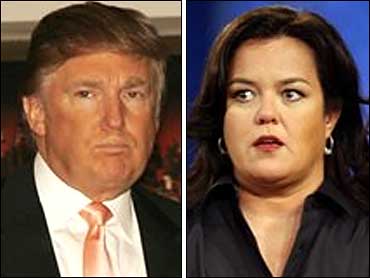 Rosie O'Donnell fired back at Donald Trump on Wednesday for taking a potshot at her struggle with depression.

In homage to him, she and the other co-hosts did the Donald Trump hair flip, the same hair flip that O'Donnell did on the show in December when their feud began.

"We should all do the hair flip. One, two, three, come on," she said as Joy Behar, Elisabeth Hasselbeck and guest host Susie Essman followed her lead.

"The guy, he can't get over me, that's all I can say," O'Donnell said. "Never mention that dump truck again."

Trump dissed O'Donnell during an interview that aired on "Entertainment Tonight" on Tuesday.

"If I looked like Rosie, I'd struggle with depression, too" Trump said, commenting on the host's battle with the condition, which was the topic of Friday's "View."

The fight between Trump, 60, and the 44-year-old O'Donnell, moderator of ABC's "The View," broke out in December after Trump announced that Miss USA Tara Conner would keep her title, which had been in jeopardy because of substance abuse. He owns the pageant.

O'Donnell said the twice-divorced real-estate mogul had no right to be "the moral compass for 20-year-olds in America." Trump fired back in various interviews, calling O'Donnell a "loser" and a "degenerate."

"I have no compassion for Rosie," Trump said in the interview aired Tuesday. "I think she suffers from depression because she beats up on so many people."

"I wouldn't dignify it with a comment," a publicist for O'Donnell told "ET."

O'Donnell responded by posting a poem on her blog Tuesday. Titled "The Mirror," it begins: "the dump truck is at it again."

On Friday's "The View," O'Donnell hung upside down to demonstrate the "inversion therapy" she says has helped her overcome depression.

Trump, host of NBC's "The Apprentice," said in January that he was finished with the quarrel — before fanning its fires a little further.

"Not everybody has to be politically correct," he said. "I think that's why this so-called feud took on a life of its own, because it wasn't politically correct. In a way it's wonderful that she doesn't like me and I don't like her. There's nothing wrong with that."

"I think a picture of Rosie hanging upside down is a very unattractive picture," said Trump. "This is one I would pay not to watch."