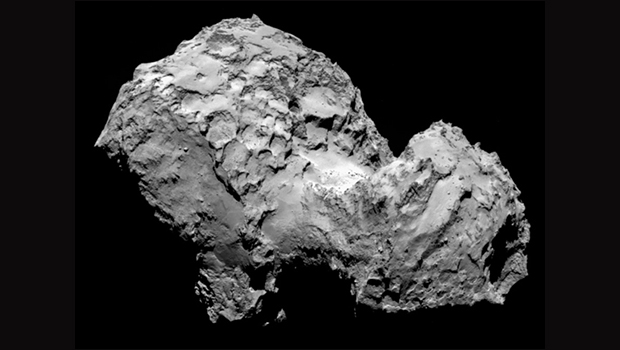 After a 10-year, 3.7-billion-mile chase, Europe's Rosetta spacecraft finally caught up with its target Wednesday, firing its main engine to precisely match orbits with comet 67P/Churyumov-Gerasimenko, giving the spacecraft a ringside seat as the icy relic falls into the inner solar system and comes to life in the warmth of the sun.

"What a wonderful moment! We're there. We've arrived," said Mark McCaughrean, senior scientific advisor with the European Space Agency's Directorate of Science and Robotic Exploration. "Ten years we've been in the car, waiting to get to scientific Disneyland. We haven't even gotten out of the car yet and look at what's outside the window. It's just astonishing."

The final maneuver needed for Rosetta to match orbits with 67P/Churyumov-Gerasimenko, racing through space at some 34,000 mph, began at 5 a.m. EDT (GMT-4) and lasted six minutes and 26 seconds. Anxious scientists and flight controllers standing by in ESA's control center in Darmstadt, Germany, had to wait 22 minutes for telemetry from the spacecraft to reach Earth 245 million miles away, confirming a successful burn.

When all was said and done, the $1.7 billion spacecraft was flying in tandem with the comet in its orbit around the sun, positioned just 60 miles or so ahead of the nucleus, ideally positioned study its cratered surface, the evolution of its coma -- the nebulous cloud that envelops a comet as it warms up -- and the eventual development of dust and ion tails.

If all goes well, the spacecraft will drop an instrumented lander to the surface of 67P in November for unprecedented close-range observations, the first such landing ever attempted.

"Rosetta is the sexiest science mission, the sexiest space mission that's ever been," said mission scientist Matt Taylor. "We're going to ride alongside this comet, we're going to have a ringside seat as we go from this rather inert object now through perihelion, that's closest approach to the sun next year, and as it starts to move away from that sun."

"That gives us this ringside seat (for) this dynamic evolution of this fantastic body. It's going to be an awesome ride. Stay tuned."

Adding to the drama, images of 67P taken by the spacecraft's OSIRIS multi-spectral camera over the past few days have revealed a heavily cratered nucleus with two distinct lobes, showing house-size boulders strewn across relatively smooth plains and towering, sharply etched cliffs 500 feet high. Even sharper views were expected later in the day as fresh images made their way back to Earth.

Over the next few days and weeks, flight controllers will move the spacecraft closer and closer to the comet, flying an intricate back-and-forth trajectory shaped like a triangle to maintain its position. All the while, Rosetta will be studying 67P/Churyumov-Gerasimenko with a battery of cameras and instruments to map its surface, to study its composition and to characterize the coma.

A major objective of the early observations is to find a good landing site for the Philae lander, a small spacecraft mounted on the side of Rosetta that carries its own suite of cameras and instruments.

In a moment of high drama, Rosetta will release Philae on Nov. 11, allowing the lander to slowly descend to the surface, anchoring itself in the frigid crust for the first in situ observations of a comet as it warms up and spews dust and electrically charged ions in tenuous tails of debris.

"Scientific Disneyland," McCaughrean marveled from ESA's control center. "The big roller coaster awaits us in November. That's the scary ride to go on, but we have all the other fun rides all the way through to next year. So we have a really great mission ahead of us."

Made up of material left over from the birth of the solar system 4.6 billion years ago, 67P/Churyumov-Gerasimenko is a frozen remnant of the primordial material used to build the sun and its retinue of planets, a representative sample of the countless small bodies that may have built up Earth's oceans and seeded the planet with the organic compounds necessary for life.

While earlier missions have flown past a handful of comets, including NASA's Deep Impact probe that blasted out a crater with a small impactor, Rosetta is the most ambitious comet research mission ever attempted.

If all goes well, the spacecraft will fly in tandem with 67P as its path carries it inside the orbit of Mars, reaching perihelion, its closest point to the sun, in August 2015, continuing its observations through the end of next year. As for Philae, no one knows how long the lander might survive, but scientists are hoping for several months of close-range observations as the nucleus heats up and spews debris.

"Rosetta is indeed the Rosetta stone as a mission, it will unlock this treasure chest as a clue to all comets," McCaughrean said. "There are trillions out there, but this is a baseline, this is the one we can now study in such detail we can re-write history and begin to understand our own history. And I think that's a great thing for us."

The European Space Agency originally planned to build a comet sample return mission in partnership with NASA, but the U.S. space agency pulled out because of budget constraints and ESA ultimately decided to launch Rosetta instead, approving the project in 1993.

"So we had to change our plans and go to a rendezvous mission and asteroid flyby," Gerhard Schwehm, former mission manager and project scientist, told CBS News in an earlier interview. "At that time, we said if you can't get the nucleus back in our laboratories on Earth, we'll send a laboratory to the comet."

Rosetta was launched on March 2, 2004. To reach 67P/Churyumov-Gerasimenko, the spacecraft had to carry out four planetary flybys, using the gravity of Earth and Mars in repeated passes to pump up the spacecraft's velocity enough to move out into deep space.

Along the way, Rosetta flew past two asteroids, sending back high-resolution pictures and other observations. By the summer of 2011, the spacecraft was too far from the sun for its solar arrays to generate enough electricity to power all of its instruments and subsystems.

At that point, flight controllers ordered the spacecraft to put itself into electronic hibernation, shutting down all non-essential systems, including its radio.

For the next two-and-a-half years, Rosetta flew in silence, constantly closing the gap with 67P/Churyumov-Gerasimenko. Finally, on Jan. 20, Rosetta woke itself up and phoned home, ready for the final leg of its long space odyssey.

For McCaughrean, a chance to get up close and personal with a comet is a once-in-a-lifetime opportunity to answer, or attempt to answer, fundamental questions about humanity's origins.

"The really big questions here are where do we come from, where does the solar system we live in come from, how was it put together, how was it assembled?" he said. "How do the planets get built up individually and how did water get to this planet? Maybe even questions about where the complex molecules (came from), the organic molecules that build us up."

"Water and life. These are questions that motivate everybody."