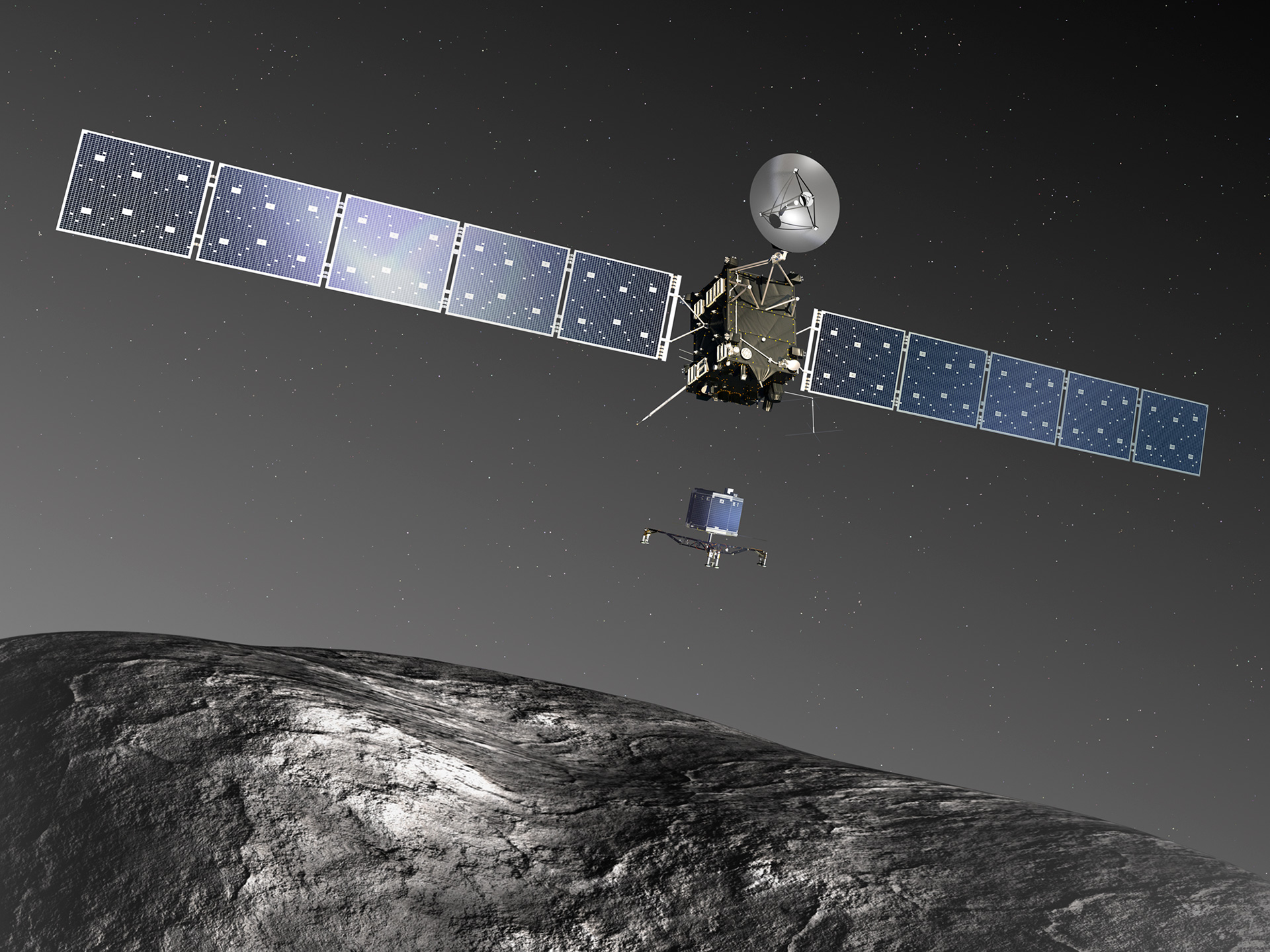 After hibernating for 31 months in the cold of deep space, the European Space Agency's solar powered Rosetta probe, finally returning to the light and warmth of the inner solar system, woke itself up and phoned home Monday, a major milestone in a $1.7 billion attempt to orbit a comet and place an instrumented lander on its icy surface.

More than 400 million miles from the sun, Rosetta's flight computer responded to a countdown timer that signaled the end of hibernation, triggering a complex sequence of events to slow the spacecraft's spin and warm its star trackers so it could determine its position and orientation in space.

About six hours after the initial wakeup, Rosetta was programmed to re-orient itself to aim its high-gain antenna back at Earth for the long-awaited call home.

The signal was expected anytime between 12:30 p.m. EST (GMT-5) and 1:30 p.m. For 45 minutes, there wasn't a peep. Then, at 1:18 p.m., huge antennas in NASA's Deep Space Network picked up Rosetta's broadcast, prompting wild applause and raucous cheers at the Rosetta control center in Darmstadt, Germany.

"We made it! Yes, yes! We can definitely see the signal from Rosetta," exclaimed Andrea Accomazzo, Rosetta spacecraft operations manager. "This is a big success for everybody."

The $1.7 billion mission, launched by an Ariane rocket on March 2, 2004, spent the past decade following a convoluted trajectory to reach Comet 67P/Churyumov-Gerasimenko, discovered in 1969. The comet's 6.5-year orbit carries it beyond Jupiter and then in between the orbits of Earth and Mars before it returns to deep space.

Assuming the spacecraft endured its long hibernation with no ill effects, Rosetta will carry out a series of carefully choreographed maneuvers in the months ahead, slipping into orbit around the nucleus of 67P, flying lower and lower until it reaches an altitude of just six miles or so in September.

After carefully studying the comet's surface, mission managers will select a landing site and if all goes well, a small lander named Philae will be released to land on the nucleus in November.

Comets like 67P are "time capsules, they are remnants of the birth of the solar system and they go back to the beginning of the solar system more than 4.6 billion years ago," said Mark McCaughrean, senior scientific advisor with ESA's Directorate of Science and Robotic Exploration.

Of particular interest is the ice found in comets, which can "give us great clues to the origin not only of our own solar system, but potentially even life," McCaughrean said. "Because we know that comets also contain organic molecules, the building blocks of even DNA and RNA. We know that there are amino acids in comets, for example. So comets play a key role in our understanding of the cycle of star formation, planet formation, perhaps life formation."
To rendezvous with Comet 67P/Churyumov-Gerasimenko, Rosetta flew past Earth a year after launch and then past Mars in February 2007, using the gravity of both planets to increase its velocity and adjust its trajectory.
After a second Earth flyby in November 2007, Rosetta flew past an asteroid and returned to the vicinity of Earth in November 2009 for a third gravity-assist flyby. The spacecraft flew past a second asteroid in July 2010 and then went into extended hibernation on June 8, 2011.
"We came to such a distance from the sun that even our large solar arrays, even our high technology solar cells, were not enough to keep the full spacecraft active," Paolo Ferri, head of mission operations, told reporters late last year. "What we had to do in June 2011, we had to switch off most of the systems, spin up the spacecraft and leave it alone.
"Since the 8th of June 2011, we have no signal form the spacecraft. This was planned. It's not something we liked doing, but this is really what the last two-and-a-half years were about."
While 67P will generate streams of icy debris as it responds to solar heating, it "is never going to be bright, it's not going to be visible to the naked eye," said McCaughrean. Even so, "it's a superb comet to go visit and do science. But we won't be able to see it with the naked eye."
Scientists do not yet know enough about 67P to plan Rosetta's close approach or pick out any potential landing sites. But as the spacecraft closes in, its cameras will capture sharper and sharper views, unveiling the comet's surface in extraordinary detail.
"We have cameras in the visible, the infrared, the ultraviolet and at millimeter wavelengths to investigate the surface structure and the temperature and the materials the comet's made of by looking from a distance," McCaughrean said. "We're going to measure the particles in the coma, the material flowing away from the comet, we're going to be able to measure the masses, the materials that the gas and dust are made out of that's flowing away."
Rosetta also will analyze the dust that hits the spacecraft and "we're going to be able to take microscopic images of the dust in the coma," he said. "We're also going to conduct a lot of experiments on the plasma, the ionized gas flowing away from the comet."
When the Philae lander descends to the nucleus in November, it will use a variety of techniques to anchor itself to a body with just 20 millionths the gravity of Earth. On-board cameras will document the journey, followed by a panorama from the surface "all the way around, 360 degrees, in stereo of the surface and then looking downward, doing microscopy, looking in high resolution at the surface of the comet," McCaughrean said.
"We're then going to have a number of little laboratory experiments that will measure the gas and the dust, the organic material and the plasma coming away," he said. "And then we're actually going to drill beneath the surface to look at material just under the surface and melt some of that material, we'll dig (it) up and bring into the spacecraft." The lander and Rosetta mothership will work together in another investigation, beaming radio signals back and forth that will "go through the comet and measure it's inside, we'll actually be able to measure the internal structure of the comet through a form of tomography."
Scientists also plan to precisely measure the time delay of signals sent from Rosetta to Earth to map out the comet's gravity.
"This mission's been going on for more than 10 years, but the exciting phase takes place now," McCaughrean said. "This time capsule has been locked away for 4.6 billion years. It's time to unlock the treasure chest."