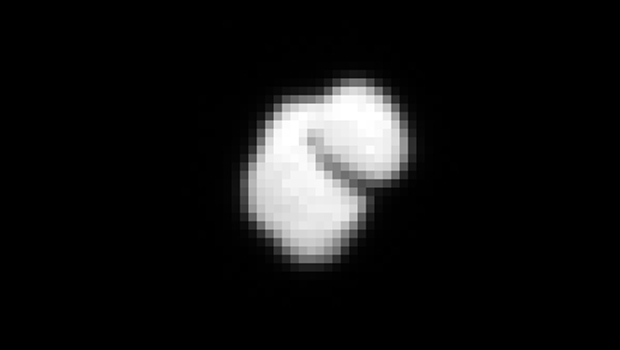 Scientists say a space probe aiming to become the first to land on a comet has taken images that appear to show its target could actually be two separate lumps of rock and ice flying in tandem.

The pictures released this week were taken by the European Space Agency's Rosetta probe, which is nearing the final stage of its decade-long mission to rendezvous with and drop a lander on comet 67P/Churyumov-Gerasimenko. The landing is planned for November.

Mission scientist Matt Taylor says the images shot from several thousand miles away show 67P is shaped like "a strange-looking potato." The formation of the comet may play a role in its shape.

The formation of 67P/Churyumov-Gerasimenko remains a mystery to scientists, the Rosetta team explains in a blog post. One popular theory is that the two comets melded together in a low-velocity collision billions of years ago. Another theory proposes the opposite -- that a single comet was tugged into a curious shape by the strong gravitational pull of a planet.

"Perhaps the two parts of comet 67P/C-G will one day separate completely," the team suggested in the blog post.

Other theories include that the comet was a rounder object, but was deformed after its ice evaporated or it became asymmetrical after a near catastrophic impact.

"We currently see images that suggest a rather complex cometary shape, but there is still a lot that we need to learn before jumping to conclusions. Not only in terms of what this means for comet science in general, but also regarding our planning for science observations, and the operational aspects of the mission such as orbiting and landing," said Rosetta Mission Manager Fred Jansen in the blog post.

But they won't have to wait long. With fewer than 10,000 kilometers (about 6,200 miles) to go, scientists will soon get their answers.