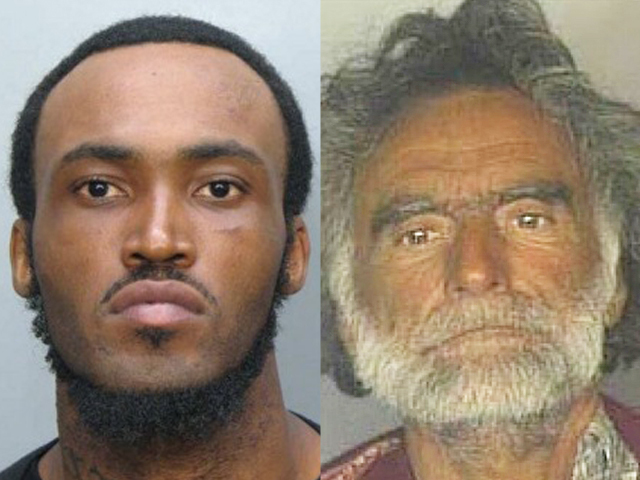 (CBS) MIAMI - In recorded police interviews released Wednesday, Ronald Poppo describes the bizarre attack along a Miami highway that left the homeless man missing about 75 percent of his face on May 26. Poppo described his attacker, Rudy Eugene, initially as "a good guy" who suddenly went "beserk" and threatened to kill him, CBS Miami reports.

"He attacked me. He just ripped me to ribbons. He chewed up my face. He plucked out my eyes. Basically that's all there is to say about it," 65-year-old Poppo said.

Poppo's statements were recorded during a July 19 interview with Miami homicide detectives. In the interview, Poppo said 31-year-old Eugene at first seemed friendly, but then he started to become angry about not being able "to score" at Miami Beach, where thousands were partying through the Memorial Day weekend.

"For a very short amount of time I thought he was a good guy," Poppo said. "But he just went and turned berserk. He apparently didn't have a good day at the beach ... And I guess he took it out on me or something. I don't know."

Poppo remains in the Perdue Medical Center after losing an eye, his eyebrows, his nose and parts of his forehead and right cheek in the May 26 attack. With his other eye was severely damaged, Poppo was left blind by the attack.

"He just started to scream, and was talking kind of funny talk for a while too," Poppo said. "He must have been souped up on something."

Eugene was shot and killed by a Miami police officer during the attack on the Macarthur Causeway. Lab tests found only marijuana in Eugene's system, but no other drugs or alcohol.

Although Poppo seemed at peace with what happened to him, certain details of the attack were still vivid in his mind.

"He mashed my face into the sidewalk," he said. "My face is all bent and mashed up. My eyes got plucked out. He was strangling me in wrestling holds at the same time he was plucking my eyes out."

In a subsequent interview, Poppo told detectives that Eugene blamed Poppo for stealing his bible. Pieces of Eugene's bible were found scattered along the causeway. Poppo said he never saw Eugene with a bible and denied taking it.

"What can provoke an attack of that type?" Poppo asked. "I certainly didn't curse at the guy or say anything mean or nasty to him."

Although some media reports suggested the two men may have previously met when Eugene could have possibly served Poppo at a homeless shelter, Poppo said he does not recall ever meeting or seeing Eugene before the day of the attack.

At times during the police interview, Poppo seemed confused about some details of the attack. He described Eugene wearing a green shirt and getting out of a car, but surveillance video recorded from security cameras on The Miami Herald building showed a naked Eugene walking up to Poppo as cars and bicyclists zipped by. Poppo was reclining on the sidewalk near the parking garage where he lived.

Although the attack left Poppo blind in both eyes and he has to undergo occupational therapy to deal with the new realities of his life, Poppo seems relatively resigned to what happened to him, thanking the police for their prompt rescue during the face-chewing attack.

"I thank the Miami Police Department for saving my life," Poppo said. "That's about the best I could sum it up as. If they didn't get there in a nick of time, I would definitely be in worse shape."

Complete coverage of Rudy Eugene and Ronald Poppo on Crimesider