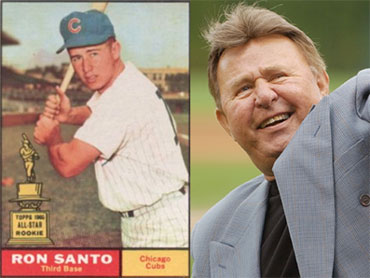 This column CBSSports.com. It was written by Scott Miller.

People will dwell on the Hall of Fame snub, which was shameful and wrong and remained an open wound until his dying day.

Which, sadly, came overnight Thursday when that Great Cub in the Sky waved Ron Santo home one final time.

Me? What I'm going to recall, even more than Santo's 2,254 career hits, five Gold Gloves and clicking heels, is the sunshine and the broadcast booth and the long lines of fans.

You should have seen Santo at work in spring training in Mesa, Ariz.

Well, not really at work, because, technically, that would have meant broadcasting that day's Cactus League game with his graceful and talented radio partner, Pat Hughes.

No, you should have seen the scene before the game, the lines of people in front of the broadcast booth, looking for an autograph, a photo with Santo, a handshake. They came armed with Sharpies, digital cameras and stories to tell the legend about the time when they went to Wrigley Field with their daddy back in 1965 and. ...

And the incredibly accommodating Santo had a smile for all.

Rarely have I seen a man with such devoted, unabashed love for a ballclub than Santo, who carried a torch for the Cubs that never dimmed.

But what set him apart was, the only thing he maybe loved as much as or more than the Cubs was people.

If you were lucky enough to witness him in public even once -- especially at spring training -- you couldn't help but smile. Rarely does life produce a man so genuine, so magnetic and so humble.

If you ever watched "This Old Cub", a documentary made with the loving and talented touch of his son Jeff, who co-produced the film, and saw the things Santo had to go through simply to get himself ready for each new day, this sunny optimism was even more incredible. Stricken decades ago by diabetes, Santo long ago had both legs amputated below the knees.

On his bad days, Santo, a nine-time All-Star, was a fount of inspiration.

On his good? My goodness.

What a shame that he never made the Hall while he was alive, but that's another argument for another day. Yes, his career hit total was low. No, he never led his team to the postseason. But his glove strengthened his case immeasurably. Obviously. Hall voters never did size him up correctly.

Besides, if the Hall is nothing but a numbers game, then why don't we simply compile a series of qualifying statistics and let the computers spit out the final verdict on who gets in?

Yes. Another argument for another day.

Today is about celebrating one of the greatest Cubs who ever lived.

It is about toasting those anguished groans clearly heard behind Hughes' play-by-play when another Cub ran into an out, about raising a glass to the man who would climb right back up after every fall and ooze more optimism.

Ron Santo is not yet in Cooperstown. But he is well settled in the hearts of so many thousands of people in Chicago and throughout the land.

What a place that is to be. And what a blessing it must have been to soak in the heartfelt love of so many.