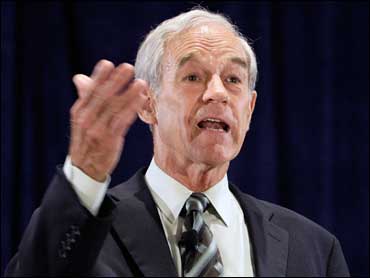 Republican presidential candidate Ron Paul said Thursday night he is ending his campaign but will keep spreading his message by working to help elect libertarian-leaning Republicans to public office around the country.

"The campaign is going to shift gears. It's going to accelerate. It's going to get much bigger," Paul told The Associated Press in an interview before a rally where he was making the announcement. "To me, it's a technical change."

Paul formally announced the move - his new "Campaign for Liberty" - in a speech to supporters attending the Texas Republican Party state convention. He said he expected many at his Thursday night rally and other supporters from around the nation to attend an alternative mini-convention he will host Sept. 2 in Minnesota to coincide with the Republican National Convention in St. Paul.

Benton added that the announcement was "not a disappointment at all. I think this is really exciting."

Hundreds of people rushed into a Houston hotel ballroom to hear Paul speak. They listened to a guitar player perform peace and freedom songs and gave loud cheers when Paul said the U.S. needs to bring home the troops from the Middle East. They also broke into applause when he spoke out for following the law and the Constitution.

He repeated his stances on other major issues, speaking against the United Nations and the income tax.

"Get more people," he urged. "They're paying attention, and it's across the political spectrum."

In the AP interview, Paul said his political message would not change and that he'll continue to speak out, just as he has since he first ran for Congress from Texas.

"It's just now that there's so much more enthusiasm, and so many more people involved," he said. "This last year has been astounding. ... We have to keep it going."

The announcement is a formality. The 72-year-old congressman won few delegates during the Republican primaries, but he raised large amounts of money online and developed a huge grass-roots following.

Benton said Paul is beginning a "Campaign for Liberty."

The presidential campaign still has about $4.7 million in the bank, which can now be used for the new effort, Benton said, describing it as a "permanent campaign."

"We're going to work with the grass roots," Benton said. "People are really eager to continue and grow these efforts."

Paul opposes the war in Iraq and is a champion of small government. His campaign also drew support from independents and Democrats opposed to the war. His supporters have been pushing for him to have a speaking role at the GOP national convention.

But Paul has refused to endorse likely Republican presidential nominee John McCain, and he told the AP that was unlikely to change.