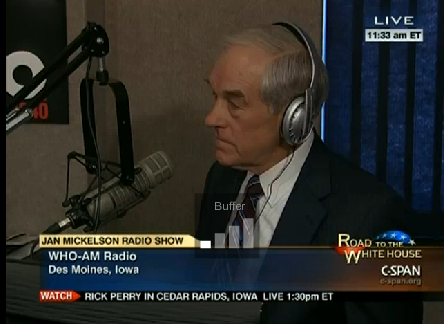 Republican presidential hopeful Ron Paul continues to distance himself from controversial newsletters published under his name in the 1980s and 1990s, minimizing in a Thursday interview the extent of offensive material published in the letters and arguing that were "many times" he did not edit them anyway.

Paul, speaking to radio host Jan Mickelson on Des Moines' WHO-AM, reiterated his defense that he did not write the controversial passages which have since been publicized, and argued that overall, there was "a total of about 8 or 10 sentences" of "bad stuff."

In 2008, reporter James Kirchick revealed in the New Republic a number of incendiary passages from the monthly newsletters, which carried names like "Ron Paul's Freedom Report" and the "Ron Paul Political Report." Many of the newsletters, which were mostly written in the first person and often didn't cite other bylines, were reportedly being held in collections of extreme-right political literature.

"Paul's lucrative and decades-long promotion of bigotry and conspiracy theories, for which he has yet to account fully, and his continuing espousal of extremist views...should make him unwelcome at any respectable forum," Kirchick wrote earlier this month, revisiting the topic in the Weekly Standard.

On Thursday, Paul said he "wrote a certain portion" of the newsletters but that otherwise, he acted largely as their publisher.

"I had some responsibility for [the content] because the name went out on my letter but I was not an editor, I'm like a publisher," Paul told Mickelson. "And if you think about publishers of newsletters, every once in awhile they get some pretty junky stuff in their newspapers and they have to say this is not the sentiment and position of that newspaper and this is certainly the case."

"There were many times when I didn't edit the whole letter and other things got put in, and then I didn't even really become aware of the details until many years later when somebody else called and said, 'Did you know what was in it?'" he said. "It's bad that it happened but I disavowed all these views."

Paul, however, played down the extent of the content in question - which has been decried as racist, homophobic, anti-Semitic, and espousing of extremist views.

"These were sentences that were put in - I think it was a total of about eight or ten sentences, and it was bad stuff," he said. But, he added, "it wasn't a reflection of my views at all, so it got in the letter, I think it was terrible, it was tragic."

The candidate, who is currently seen as a favorite to win the Iowa caucuses, maintained that overall, the "bad stuff" comprised "probably ten sentences out of, you know, 10,000 pages for all I know."

In an email to TPM, Kirchick disputed that assessment.

"Ron Paul's characterization of the newsletters as only containing 'eight to ten sentences' that can be characterized as 'offending' is preposterous," he told the publication. "As anyone can see from the scans of the newsletters available on the TNR website or posted elsewhere, the documents contain pages upon pages of bigoted statements and outright paranoia."