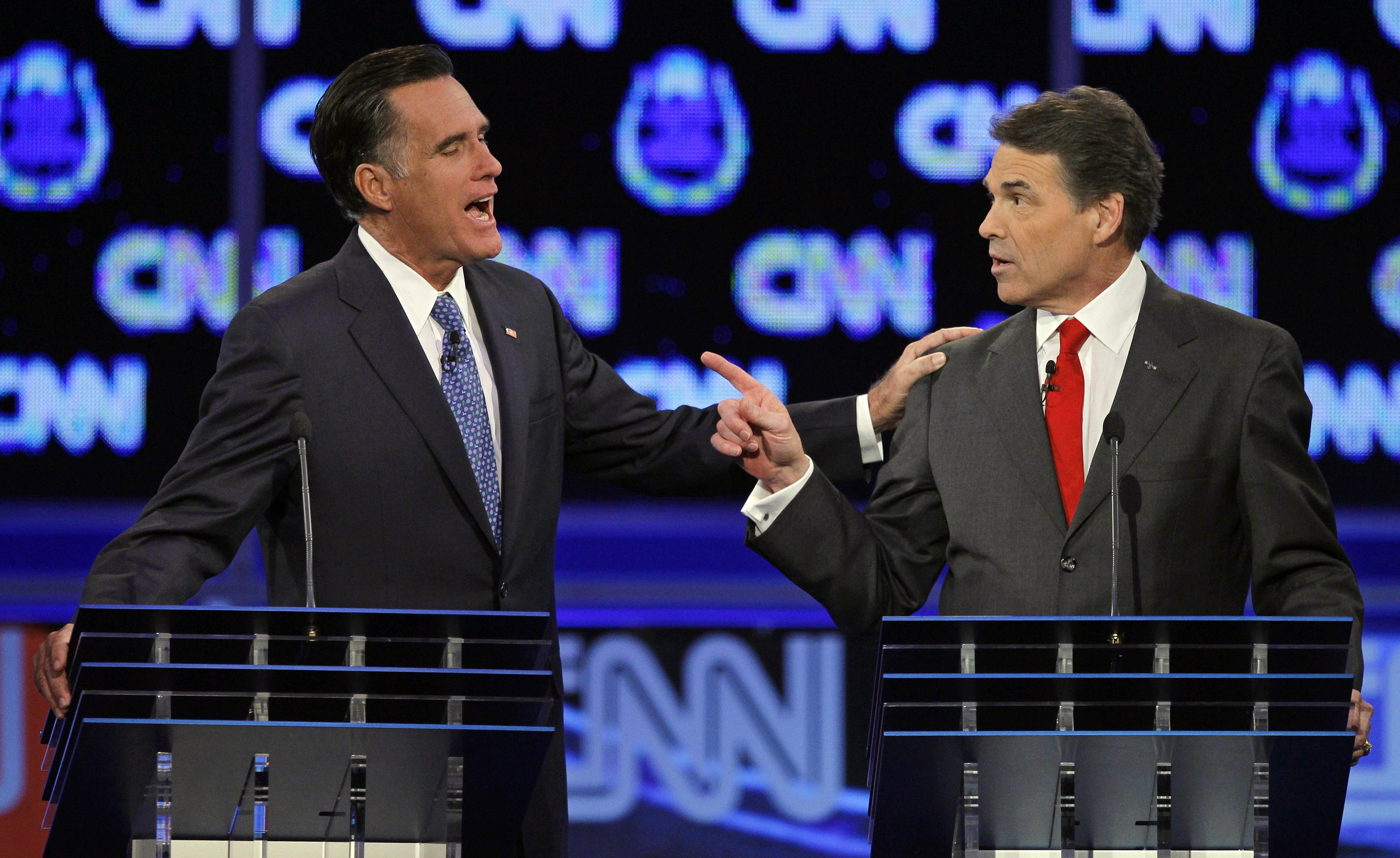 "You just don't have credibility, Mitt, when it comes to repealing Obamacare," charged fellow candidate Rick Santorum during a heated exchange in Las Vegas. "Your plan was the basis for Obamacare. Your consultants helped Obama craft Obamacare. And to say that you're going to repeal it, you just -- you have no track record on that that that we can trust you that you're going to do that."

Romney argued that the law he signed while Massachusetts governor was specific to the state - and that he never believed that it or anything like it should necessarily be imposed on the nation as a whole.

"I was in interviews in this debate stage with you four years ago. I was asked about the Massachusetts plan, was it something I'd impose on the nation? And the answer is absolutely not," Romney told Santorum. "It was something crafted for a state. And I've said time and again, Obamacare is bad news. It's unconstitutional. It costs way too much money, a trillion dollars. And if I'm president of the United States, I will repeal it for the American people."

The former Massachusetts governor added that voters in his state supported his health care program three-to-one, and that the plan was a response to a state-specific need.

"We dealt with a challenge that we had; a lot of people that were expecting government to pay their way," he said. "And we said, you know what? If people have the capacity to care for themselves and pay their own way, they should."

Former House Speaker Newt Gingrich also hammered Romney for his health care plan, noting that while likening "Romneycare" to "Obamacare" was "not a fair charge," the Massachusetts plan was essentially "one more big government, bureaucratic, high-cost system, which candidly could not have been done by any other state because no other state had a Medicare program as lavish as yours, and no other state got as much money from the federal government under the Bush administration for this experiment."

"There's a lot as big government behind Romneycare," Gingrich added. "Not as much as Obamacare, but a heck of a lot more than your campaign is admitting."

Referencing the Newt Gingrich-affiliated Heritage Foundation's onetime support for the individual health care mandate, Romney fired back: "Actually, Newt, we got the idea of an individual mandate from you!"

"That's not true," responded Gingrich. "You got it from the Heritage Foundation."

Mitt Romney and Rick Perry go mano-a-mano over immigration
Rick Perry: Time to consider defunding United Nations
Cain's rivals: We love you, but we hate 9-9-9
Romney: It's "dangerous" to choose president based on religion


Gingrich added: "What you just said is not true. You did not get that from me. You got it from the Heritage Foundation."

"And you never supported them?" Romney pressed on: "Let me ask, have you supported in the past an individual mandate?"

"I absolutely did with the Heritage Foundation against Hillarycare," Gingrich said.

"OK. That's what I'm saying. We got the idea from you and the Heritage Foundation," Romney concluded.

Romney's support for the Massachusetts health care plan has been a constant source of criticism throughout his campaign, and he has repeatedly tried to distance himself from the accusation that President Obama used Romney's plan as the basis for his own controversial law.

On Tuesday, he continued his efforts to deflect that criticism.

"The best way to make markets work is for people to be able to buy their own products from private enterprises," he said. "What we did was right for our state, according to the people in our state. And the great thing about a state solution to a state issue is, if people don't like it, they could change it."