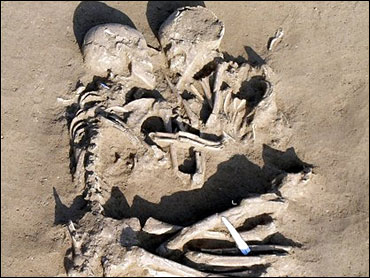 It could be humanity's oldest story of doomed love.

Archaeologists have unearthed two skeletons from the Neolithic period locked in a tender embrace and buried outside Mantua, just 25 miles south of Verona, the romantic city where Shakespeare set the star-crossed tale of Romeo and Juliet.

Buried between 5,000 to 6,000 years ago, the prehistoric lovers are believed to have been a man and a woman and are thought to have died young, as their teeth were found intact, said Elena Menotti, the archaeologist who led the dig.

"As far as we know, it's unique," Menotti told The Associated Press by telephone from Milan. "Double burials from the Neolithic are unheard of, and these are even hugging."

The burial site was located Monday during construction work for a factory building in the outskirts of Mantua. Alongside the couple, archaeologists found flint tools, including arrowheads and a knife, Menotti said.

Experts will now study the artifacts and the skeletons to determine the burial site's age and how old the two were when they died, she said.