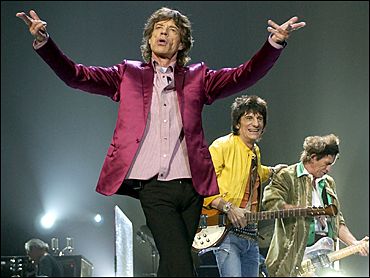 It's only rock 'n roll - with a message - as veteran rockers the Rolling Stones turned a free concert into an effort to raise awareness about global warming.

"You know something, we're all here ... for a very good cause, and you should all feel good about yourselves," lead singer Mick Jagger said on stage at the Staples Center on Thursday.

The concert took place in an area that's one of the nation's smoggiest, despite strict statewide standards for motor vehicle emissions. The event was organized by the Natural Resources Defense Council, a nonprofit activist group.

Former President Clinton introduced the Stones with a speech about the dangers of global warming, telling the audience it is up to average citizens to "stop the planet from burning up."

"The reason this concert is important is that the old energy economy that's cheating us as a planet is very well organized, highly centralized, rich as can be and very well politically connected," Clinton said. "And the new energy future is decentralized, entrepreneurial and needs people like you to say, `Give me a clean car, give me solar shingles to put on my roof ... Give me a clean future."'

In introducing the band, Mr. Clinton invoked one of the group's biggest hits: "Even though the Stones once said 'It's only rock 'n' roll' - tonight it's way more than rock 'n' roll," he said.

The band then opened the show with "Start Me Up," followed by "Street Fighting Man" and "You Got Me Rocking." The night was filled with a repertoire of past hits, including "Jumpin' Jack Flash," "Sympathy for the Devil" and "(I Can't Get No) Satisfaction," in which they lament women, consumerism and the world at large.

About 12,000 fans won tickets through an Internet drawing last month, while others received passes through nationwide radio station giveaways.

Among the Internet winners were Ken Fraser, 56, and his wife, Jane, 55, of Lake Forest, who said they were both Rolling Stones fans and supporters of the evening's environmental message.

"As we get older, we get more sympathetic toward the cause," Jane Fraser said. "I hope there's still a planet left for our grandchildren."

At an NRDC news conference Thursday morning, DiCaprio urged the public to "adopt an environmental lifestyle," including buying hybrid gas-electric cars like one the "Titanic" star said he drives.

Concert expenses were paid by real-estate heir and entertainment producer Steve Bing, according to organizers.

The Rolling Stones are currently completing the North American stretch of their Licks World Tour, and will launch the international leg later this month in Australia.

The show comes 34 years after the Stones performed another free concert at the Altamont Speedway in Livermore, Calif. Fighting broke out and four people died.