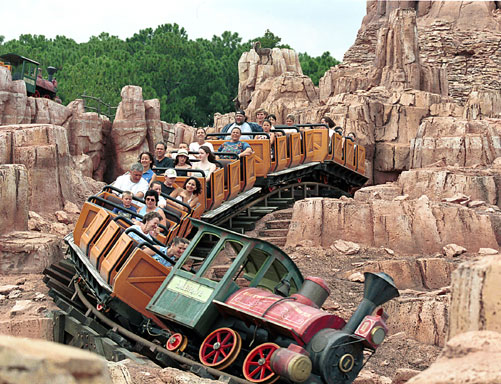 Hundreds of thousands of people head to the emergency room every year for painful kidney stones, but new research suggests some could find relief at Disney World instead.

After years of hearing patients mention that they passed a kidney stone while vacationing at amusement parks, Dr. David Wartinger, a professor emeritus at Michigan State University College of Osteopathic Medicine, decided it was time to conduct a scientific study to see if those anecdotes were really onto something.

“We’re here in East Lansing, Michigan, and when spring break happens East Lansing becomes a ghost town. Everyone goes to the amusement parks, to Florida. My patients in large numbers would head to amusement parks in Orlando and I would hear them often coming back reporting this same thing so that it started striking my curiosity. Especially after I had a patient who passed three stones in a row on three consecutive rides,” said Wartinger.

It’s not uncommon for urologists to hear patients talk about dislodging a kidney stone during certain activities that involve a lot of jostling, and Wartinger said one of the recommendations for people with kidney stone pain - when the stones are still small enough to pass, about 4 millimeters - is to go home and stay active and drink a lot of water to see if it will pass on its own. The goal is to avoid putting patients through medical procedures such as lithotripsy, which uses sound waves to break up the stone.

“It became a story we were more than familiar with – a patient conducting an activity that caused him to pass a stone. This kind of vibratory bouncing around activity is known to be helpful among urologists, but it’s never been studied,” he said.

For the study, published in the Journal of the American Osteopathic Association, the research team created a model of a kidney using 3D printer technology. Wartinger said it took about a year to develop. They filled the model with real kidney stones (three different sizes) from the patient whose kidney had been used to create the model, and real urine.

Then they took off to Disney World where they rode Big Thunder Mountain with their “patient surrogate.”

Sure enough, they determined that the roller coaster frequently helped jog the stones from the simulated kidney, which was situated in an anatomically correct position in a backpack during the rides.

Kidney stone patients who get a little white-knuckled on amusement park rides can breathe easy – a fairly moderate roller coaster seems to be good enough to do the trick. Wartinger said Big Thunder Mountain rates about a “5 out of 10” on the scale of scary roller coasters, compared to say, Space Mountain, which he’d rate a “10.”

“This particular roller coaster is the kind that uses a lap bar to hold you in a seat. It’s not a violent roller coaster,” said Wartinger. It doesn’t invert you or go 70 miles per hour.

And it doesn’t have to, in order to work, he added. “I suspect that for every patient, there is probably a roller coaster or activity that would be most likely to dislodge their stone.”

The researchers also took the test kidney on a low-key railroad ride around the park so they’d have a control arm to the study. No stones passed on that ride.

More than 300,000 patients in the United States go to emergency rooms for kidney stones every year, with an estimated 11 percent of men and 6 percent of women experiencing a kidney stone in their lifetime.

Wartinger said the study needs to be replicated in real patients, but he believes it’s promising and supports the osteopathic philosophy of medicine, which emphasizes prevention and the body’s natural ability to heal.

“What could be more osteopathic than finding a relatively low-cost, non-invasive treatment that could prevent suffering for hundreds of thousands of patients? ” he said.

South Africa is over Omicron, and that may be good news for the U.S.
Mary Brophy Marcus