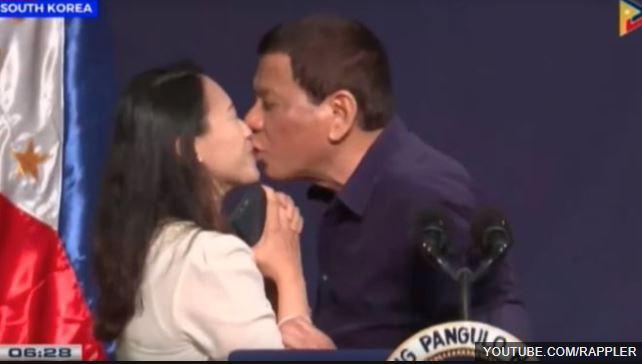 The often controversial leader of the Philippines, President Rodrigo Duterte, has again drawn condemnation for his treatment of women by kissing an overseas worker from his own country -- on stage and in front of dozens of video cameras -- during a visit to South Korea.  The woman involved said later there was "no malice" in the onstage kiss, but a rights group condemned the stunt as the "disgusting theatrics of a misogynist president."

During a recent visit to the South Korean capital, Duterte addressed a large gathering of citizens of his own country, including many overseas workers from the Philippines. During the event, he invited the woman onto stage and presented her with a book. In exchange, he repeatedly requested that she kiss him, pointing to his lips. She appeared shy, laughing at the request, but eventually getting close enough for him to move in and plant a kiss on her mouth.

In its online statement condemning the act Philippines women's rights group GABRIELA said it was, "unfortunate that the woman found it her obligation to publicly defend the act as "no malice," when it is the President who is duty-bound to explain not only because it was upon his prodding but he is bound, as a public official, by rules of ethics to explain his unruly conduct."

As CBS News partner BBC News reports, Duterte has sparked outrage with previous comments seen as misogynistic. In April 2016, he referred to the 1989 rape and murder of a female Australian missionary in the Philippines, in a town he was then mayor of.

"I was angry because she was raped," he said. "That's one thing. But she was so beautiful, the mayor should have been first, what a waste," said Duterte. His office later apologized, but he said nothing himself in public.

In February this year, Human rights groups condemned Duterte for saying his troops should shoot female communist rebels in the genitals to render them "useless," which they said could encourage sexual violence and war crimes.

The left-wing group Karapatan said that with that statement Duterte had "distinguished himself as a frothing-in-the-mouth fascist who incites the worst violations of international humanitarian law."

Duterte's remarks were, "but the latest of the series of this madman's display of tyranny, lunacy and machismo," Karapatan Secretary General Cristina Palabay said in February.

The U.S.-based group Human Rights Watch called the February remark the latest in a "series of misogynist, derogatory and demeaning statements he has made about women."

Duterte, who once used profanity to describe former U.S. President Barak Obama and had tense relations with the U.S. during Obama's two terms, has had far more cordial relations with President Trump, who has spoken of their "great relationship."

Duterte has also led a vicious crackdown on drug users and traffickers in his country. While rights groups have condemned him for backing extrajudicial killings, he has been lauded by his supporters for his firm stance on crime.