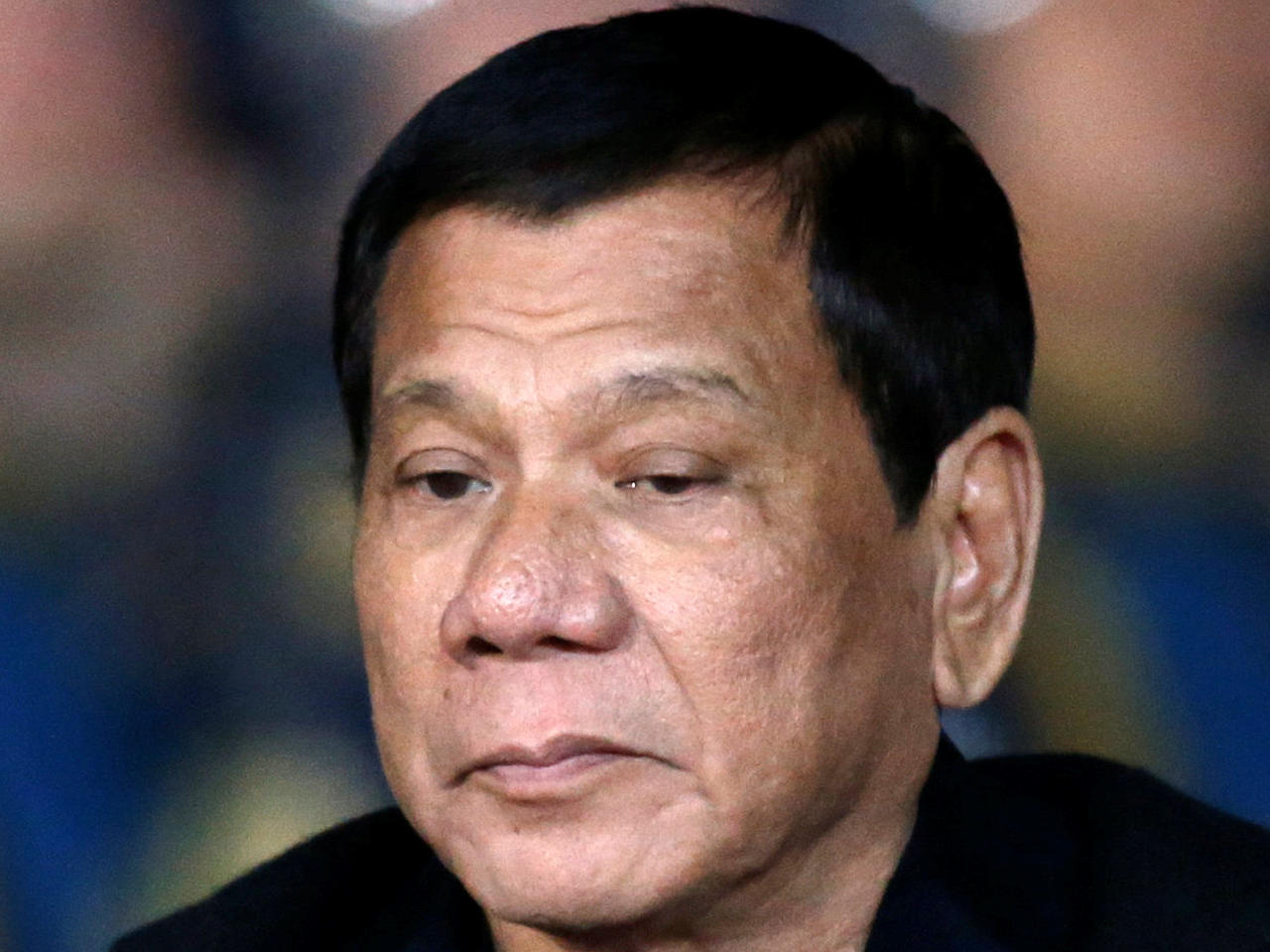 He keeps one hand in a tense fist an inch away from the black canvas bag holding his gun. He talks quickly, delivering direct admissions. Slightly bruised toes hang from his rubber flip-flops. He is a self-identified hitman who claims President Rodrigo Duterte's government fuels and demands murder.

"I think we are getting this from the government because this never happened in past administrations. It appears that money is being given to police and the police pays us," he says.

"This is," he says, pausing and breathing deeply. "From the president."

He'll be hunted if his identity is revealed, so he wears a black mask and sunglasses with dark brown lenses to speak with us on camera. It is the same outfit he dons when he murders drug users. He goes by an alias, Delo. He takes out his gun and runs his fingers over the metal which is engraved "enforcer." It is not a new gun but it is new to him. He says a policeman gave it to him recently. (CBS News attempted to independently verify Delo's claims -- that he murders drug users with police complicity, but he would not reveal his alleged dealings with members of the force.)

When Duterte launched his war on drugs in the Philippines more than a year ago, he vowed to use any tactics necessary. The president is known for vulgar language. He once called former President Obama a "son of a bitch." Endorsements of murder roll off his tongue casually.

"Hitler massacred 3 million Jews. There are 3 million drug addicts. I'd be happy to slaughter them," Duterte declared last year. Though the Dangerous Drug Board in the Philippines says there are actually 1.8 million drug users in the country, it has been increasingly plagued by drugs in the last five years. Duterte is fixated on extermination.

"You destroy my country, I kill you. It's a legitimate thing. If you destroy our young children, I will kill you. That is a very correct statement," Duterte said. He describes users as "beasts and vultures preying on the helpless, innocent and unsuspecting."

More than 7,000 people have been killed in the Philippines since the war began, and some reports put the toll above 12,000. Human rights groups are having a hard time tracking the incessant killings as the government has tried to suppress critical reports. In recent months the Philippine National Police (PNP) issued death toll statistics that were less than half of the official police figure of 7,000 drug war-related killings issued at the end of January, says Phelim Kine of Human Rights Watch. While the drug war casualties have undoubtedly gone up, the tally is murky.

"Actual number [of drug war killings] is certainly higher than what is suggested [by police]," said Chito Gascon, the Chairman of the Philippine Commission on Human Rights.

The PNP denies distorting the numbers, or hiring hitmen or vigilantes to help target drug users.

"We don't employ, we do not use, as you said, masked men or vigilante groups," insists Chief Superintendent Dionardo Carlos, the PNP spokesperson. "These are all allegations. They have to prove that."

Delo, who has been a security guard by day and a hitman by night for four years, says the business of murder has become more fluid, and more profitable, since Duterte became president. He says he gets his assignments directly from policemen, watches the target for a few days and then carries out the murder with a group of about 10 people. He deletes the texts from policemen after the job is done.

He admits he sometimes smokes shabu -- the very drug many of his targets are being killed for using -- before an assassination.

A form of crystal meth, often mixed with caffeine, shabu is the most popular drug in the Philippines. Many low-income Filipinos say they use it to stay awake for long work hours. It is particularly popular among the pedicab drivers who wheel passengers around throughout the night.

Delo says he used to kill three people a year, but in the last year he claims to have killed over 50. He says he and his partner earn $400 in cash for every murder. It takes an average Filipino on minimum wage about two months to earn as much.

"I am more confident because the police [have] my back and it's an order from the president. That's why we're not afraid to kill anymore," he says to us. He also has a family member on the police force.

Former policemen have charged Duterte with paying for murders when he was mayor of Davao City southern Philippines. There is not, however, a report that ties him to the vigilante murders since he became president.

Duterte continues to glorify the murder of drug users. Hitmen are not behind all of the staggering number of deaths in the country since Duterte's war on drugs began. The police themselves have killed many, but they claim they only shoot when it is necessary for self-defense.

"We follow the rule of law and respect and defend the rights of everyone. This is the specific instruction of the president. The commander in chief and president and CEO never told any member the PNP to just kill anybody, or to slaughter," Carlos says.

Duterte publicly commended the police after the country experienced the deadliest day in the war on drugs in August, when 58 people died in just three days.

"If we can kill another 32 every day, then maybe we can reduce what ails this country," Duterte said, referring to the first day of the bloodshed.

Delo, 40, has two children under the age of 10. They do not know their father is a murderer. He worries most about getting killed and about his true work being revealed to his children. "I do feel guilty," he says. But he claims he can't get out, even though he would like to.

The savage cycle of drug use and murder has also captured a 19-year-old drug dealer in Manila.

Just like the hitman, he hid his identity for his safety when we interviewed him. He went by the alias "Marc." He kept a white hoodie sweatshirt pulled over his head and hid his face behind a black mask.

"I am aware that it puts other people's lives in danger as well but this is what I do to make money. I have nothing else that I can make money from," Marc says. He left his job as a construction worker for drug dealing. He now makes four times as much money, which helps him support his parents and his younger siblings.

Bribery is Marc's thin line of defense: he gives cops free drugs. One time he was with a group of people who were killed in a police operation later that night. He was warned it would happen, through a text message from a cop. He left. The other dealers got caught in the carnage and most of them were killed.

Marc says demand has gone down since he got involved in selling drugs a few years ago. He used to sell shabu to about 70 people a day, now he sells to about 50.

There are other indicators that demand is down as the war on drugs continues. The PNP told CBS News there have been only 23 cases filed due to drug-related arrests since July of last year, although that number was not independently verified.

Earlier this month Duterte's approval ratings took their first double-digit hit. Days later, the government shut down the PNP anti-drug operations and handed them over to the Drug Enforcement Agency. Before this happened, the PNP allowed us to come on an anti-drug operation in one of the small areas in Quezon City.

The goal of the anti-drug operations -- which have been carried out almost every day for the last year -- is to round up drug users and get them to surrender so they can be tracked by the government and given services to deal with their addiction.

The truth of this drug war is not easy to find, and less so given mounting international pressure on the Philippines over the aggressive tactics and reports of extrajudicial killings. People in the streets told us that the police simply kill drug users.

Before we went out, Police Superintendent Bobby Glenn Ganipac answered our questions in his office. He sees Duterte as the first president "to have proven his word."

Despite criticism from the outside, he said the president "stands like a stone." Ganipac bluntly refuted charges that police carry out extrajudicial killings, but said there are instances where the police must fire.

"We will kill them if they put up a fight. If they don't surrender then we will kill them," Ganipac said of drug users, as he sat behind his wooden desk.

When we got to the location of the operation, we were told there were 22 people on the list for house visitations that day. The list of drug users was provided by the local broad-shouldered, solemn-faced Barangai leader, the Filipino name for the most local tier of government.

We went to four houses. The senior police officer used phrases like "we invite you to the Barangai." That is where they do drug testing. The scenes felt eerily calm. Then, a child broke into hysterical sobs as her father was taken in for drug testing. Her thin arms flailed in the air with anger.

She helplessly plunked down on a bed and pulled a pink blanket over her cheeks as tears streamed from her eyes. Minutes later, the police declared the operation over. We asked if they were cutting it short because we were there and pointed to the list of 20 people, making it known that we had not gone to all of the homes. They stumbled, unable to deny that they had not finished their round in full. We went back out to few more homes, but not all 20.

Back at the police station is a jail where they keep drug users temporarily before bringing them to the overflowing national jails.

"F****** s***," said one user when asked about his view on the drug war. Then his eyes, glazed in fear, began to play ping-pong in their sockets, darting every which way. He nervously ran his hand over his neck.

Finally he motioned to explain his silence by quickly pointing a finger at an officer nearby and making a hushing signal over his lips. He nodded affirmatively when we asked if he would get in trouble for talking to us.

The officer who caught his eye rushed to fill the silence with an explanation: "These guys are being charged and will face the consequence," he said. "So that is better for them than to be killed."