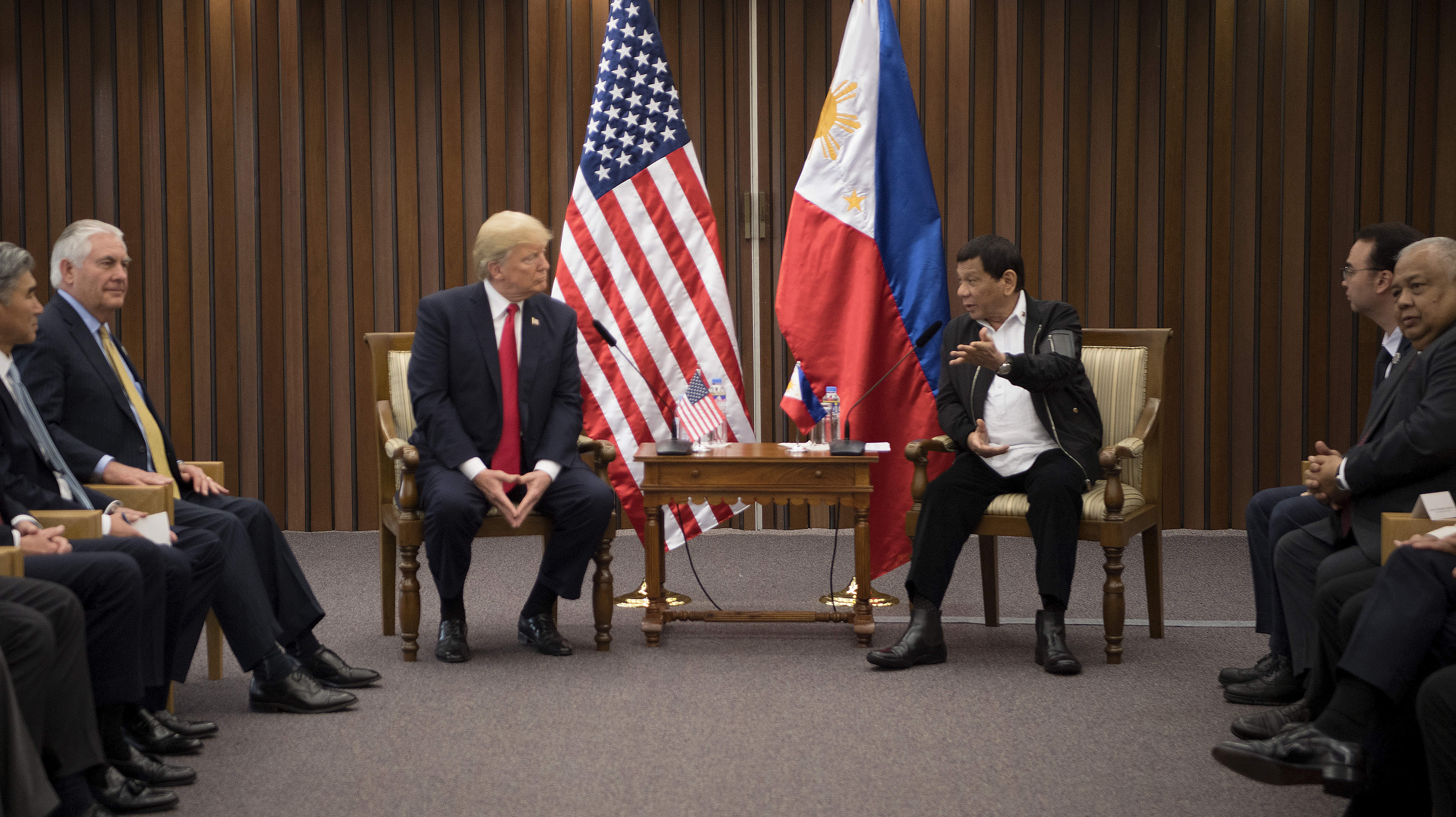 MANILA, Philippines -- His lengthy Asia trip down to its final days, President Donald Trump once more pushed for equitable trade deals and opted to publicly prioritize strategic interests over human rights, declining to shine a spotlight on the violent drug war overseen by his Philippine host.

What Mr. Trump did not do was what many predecessors have done before; highlight human rights abuses while overseas.

Duterte once called then-President Obama a "son of a bitch." This week, he boasted that he murdered a man with his own hands. But all that went unmentioned in public by Mr. Trump when the leaders held talks Monday in the Philippines at a summit of the Association of Southeast Asian Nations (ASEAN).

During brief remarks to reporters, Mr. Trump said he and Duterte have "had a great relationship" but avoided questions on whether he'd raise human rights issues.

The White House later said the two leaders discussed the Islamic State of Iraq and Syria (ISIS), illegal drugs and trade during the 40 minute meeting. Spokeswoman Sarah Huckabee Sanders said human rights came up "briefly" in the context of the Philippines' fight against illegal drugs. She did not say if Mr. Trump was critical of Duterte's program.

Reporters witnessed the beginning of the leaders' bilateral meeting, during which Mr. Trump praised Duterte's hospitality, the organization of the summit he was hosting and even Manila's weather. Mr. Trump said nothing about human rights and both leaders ignored shouted questions about the violent drug crackdown. The two men also shared a laugh in the meeting when Duterte called reporters "spies."

In remarks later, Mr. Trump said Duterte provided "incredible hospitality" to the leaders during their visit, including entertainment at a dinner Sunday night that reportedly featured Duterte singing Trump a song.  Mr. Trump also again touted U.S. economic gains since the election, saying the country has been moving ahead "brilliantly."

He was winding down his lengthy Asia trip with an international summit and a series of meetings with Pacific Rim allies, including his host in the Philippines.

Mr. Trump jointly met Monday with Australian Prime Minister Malcom Turnbull, with whom he had a contentious phone call last winter, and Japanese Prime Minister Shinzo Abe, who hosted the president in Tokyo earlier in the trip. Mr. Trump raved about his accomplishments on his five-nation journey, including on trade and North Korea, but said he would wait until his return to Washington on Wednesday to elaborate with a "major statement."

"We've made some very big steps with regard to trade -- far bigger than anything you know," Mr. Trump told reporters at the beginning of the meeting in Manila, touting business deals forged between U.S. and foreign companies.

"We've made a lot of big progress on trade. We have deficits with almost everybody. Those deficits are going to be cut very quickly and very substantially," Mr. Trump said.

"Except us," Turnbull chimed in, to laughs.

"You're the only one," Mr. Trump responded.

He also said the trip had been "very fruitful" for the United States and pointed to the warm welcomes he had received in capitals like Tokyo, Seoul and Beijing.

"It was red carpet like nobody, I think, has probably ever received," Mr. Trump said. "And that really is a sign of respect, perhaps for me a little, but really for our county. And I'm really proud of that."

The opening ceremonies of the Association for Southeast Asian Nations conference began with pageantry, including a group photo of the leaders and the summit's traditional handshake. That cross-body handshake, during which each leader shakes the opposite hands of those next to him or her, briefly baffled Mr. Trump, who then laughed as he figured out where to place his arms.

One of the leaders on his flank was Duterte.

While in the Philippines, Mr. Trump will also meet with Prime Minister Narendra Modi of India, which plays a key role in the U.S. vision of an Indo-Pacific region that attempts to de-emphasize China's influence. And he was slated to have dinner with Turnbull.

And swirling questions about Russian interference in the 2016 U.S. election followed Mr. Trump halfway across the globe.

Breaking with his presidential predecessors, Mr. Trump has largely abandoned publicly pressing foreign leaders on human rights, instead showing a willingness to embrace international strongmen for strategic gain. He has cozied up to autocrats such as Saudi Arabia's King Salman, Egyptian President Abdel-Fattah el-Sissi and Russian President Vladimir Putin. And earlier in this trip to Asia, he made no mention of human rights during multiple appearances in Beijing with Chinese President Xi Jinping.

"Mr. Trump seems very comfortable with strongmen. It's not just that he won't criticize Duterte. I wouldn't be surprised if he patted him on the back," said Mike Chinoy, senior fellow at U.S.-China Institute at the University of Southern California, before the meeting.

Duterte's war on drugs has alarmed human rights advocates around the world who say it has allowed police officers and vigilantes to ignore due process and to take justice into their own hands. Government officials estimate that well over 3,000 people, mostly drug users and dealers, have died in the ongoing crackdown. Human rights groups believe the victim total is far higher, perhaps closer to 9,000.

"Human rights groups, I think, will be quite disappointed by the visit," said Amy Searight, director of the Southeast Asia Program at the Center for Strategic and International Studies. "It's unlikely that human rights or rule of law or due process are going to be topics that President Mr. Trump will raise."

Duterte has strenuously defended the violence and boasted of participating himself.

Late last year, he bragged that he personally pulled the trigger and killed three people years ago while serving as mayor of Davao City. And last week, while in Vietnam for an international summit, he said he took his first life years earlier.

"When I was a teenager, I had been in and out of jail, rumble here and there," Duterte said during a speech in Danang, where he briefly crossed paths with Mr. Trump on the sidelines of an international summit. "At the age of 16, I already killed someone."

He claimed he fatally stabbed the person "just over a look." His spokesman later tried to downplay the comment, saying, "I think it was in jest."

Mr. Trump has shown little interest in pressuring Duterte to rein in the violence, instead saluting him during a May phone call.

"I just wanted to congratulate you because I am hearing of the unbelievable job on the drug problem," Mr. Trump told Duterte, according to a transcript of the conversation that later leaked. "Many countries have the problem, we have a problem, but what a great job you are doing and I just wanted to call and tell you that."

Mr. Trump also criticized Mr. Obama during the call, noting that his predecessor "did not understand" the drug problem the Philippines faces. Meanwhile, Duterte was openly critical of Mr. Obama in the final year of his presidency, including cursing his name.

White House officials have suggested there is a strategy behind Mr. Trump's flattery of Duterte.

Advisers have said that while Mr. Trump was always unlikely to publicly chastise the Philippine president, he may offer criticisms behind closed doors. Mr. Trump would plan to hold his tongue in public in order not to embarrass Duterte, whom he is urging to help pressure North Korea and fight terrorism, and to avoid pushing him into the arms of China.

"If the administration is not going to care about human rights in China, why would you care in the Philippines?" asked Gordon Chang, Asia expert and author of "Nuclear Showdown: North Korea Takes On the World." He said the "logical thing to do is keep them close and not let Duterte flirt with China. In our struggle with China, we need all the friends when we can get."

Duterte has seemed less committed to the strategic partnership with the U.S. Searight said a good relationship is "vital to the United States given its location on the South China Sea and the enhanced access that the American military has gotten in recent years with the Philippines."

White House aides have suggested that Mr. Trump's strategy has worked before, pointing to his interactions with el-Sissi. Mr. Trump refrained from chastising the Egyptian leader but quietly worked with him to help engineer the release of American prisoner Aya Hijazi in April.

Mr. Trump dismissed the notion that he buddied up to dictators. He said Saturday he has great relationships with all sorts of leaders, "every person in that room today," after leaving a summit in Vietnam attended by Duterte and Putin, among others.

Human rights groups have expressed dismay at Mr. Trump's public silence, believing that the spotlight an American president can shine on human rights abuses overseas can rally pressure on an authoritarian regime to change its ways.

"In the old days, we used to call on the U.S. government to raise human rights issues during these trips," said John Sifton, Asia advocacy director at Human Rights Watch. But given the administration's lack of credibility in raising human rights abuses, he said, they have pivoted to a different tack, focusing on international attention.

"We haven't given up," Sifton said.