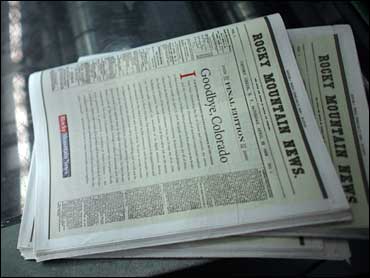 On the day his newspaper published its final edition, Rocky Mountain News Editor John Temple advised a gathering of Colorado journalists to focus on local news and suggested creating online content that niche audiences might pay for.

"It's not realistic to think in this day and age that people are going to have one information source and you're going to be it. You try, you die," Temple told the Colorado Press Association convention on Friday.

"If you're not experimenting, then I think you're in trouble," said Temple, who also held the titles of publisher and president.

The E.W. Scripps Co., which owns the News, announced Thursday that the Friday edition would be the newspaper's last after nearly 150 years in business.

"Goodbye, Colorado," read the headline on a 52-page commemorative edition wrapping the regular newspaper Friday. "STOP THE PRESSES," read the front-page headline inside.

Mike Simonton, a bond analyst at Fitch Ratings, said a number of other newspapers could close by the end of 2010, and those that survive will be focused on local news with smaller staffs and less printed content.

Four owners of 33 U.S. daily newspapers have sought Chapter 11 bankruptcy protection in the past 2 1/2 months, and a number of other newspapers are up for sale.

"We think this downturn is incremental to a very severe longer-term pressure from the Internet," Simonton said. "Many of the newspaper groups are in dire financial situations. We believe there will be more newspaper group bankruptcies and more newspapers closing over the next two years."

Scripps said the News lost $16 million last year. In December, the company put the News up for sale, along with its 50 percent stake in the Denver Newspaper Agency, which handled business operations for the News and its rival, The Denver Post, under a joint operating agreement. No viable buyer came forward.

Under the JOA, approved in 2001, the newspapers shared business operations while keeping their newsrooms separate. Both papers published every weekday. The Post, owned by MediaNews Group Inc., published Sunday editions while the News handled the Saturday edition.

On Friday, The Post prepared to publish a Saturday print edition for its readers and for News subscribers, who will now get The Post for the length of their subscriptions.

Post Editor Greg Moore said his newspaper didn't consider an online-only edition for the first Saturday. After Scripps' Dec. 4 announcement that the News was for sale, he said, "we knew this might happen. ... So I've had a lot of time to prepare for this."

William Dean Singleton, chairman and publisher of The Post and CEO of MediaNews, has said he would like to keep at least 80 percent of News subscribers. Simonton said that was a realistic goal since those subscribers have shown they value a printed product.

The Post has hired 10 News staffers, including columnists, and is picking up features and comics that the News published.

"We're going to make a play to get all those readers over time, and to keep them," Moore said.

The overlap in readership for the newspapers is roughly 14,000, according to the Denver Newspaper Agency. There were no immediate plans to raise ad, subscription or newsstand prices.

The Saturday edition of The Post will include a new home section called "Inside and Out" and features on things to do on the weekend, Moore said.

Singleton, who is also chairman of the board of The Associated Press, has said Denver could support only one newspaper. He said Thursday he was confident his newspaper would survive.

The state Senate paused Friday morning to lament the closing of the News and applauded one of its statehouse reporters, Ed Sealover, who had stepped into the chamber.

Republican state Sen. Shawn Mitchell, one of the Senate's most vocal debaters, said he wouldn't even try to be eloquent.

The American Society of Newspaper Editors announced Friday it was canceling its annual convention, scheduled for April, so newspapers can save money and focus on surviving the recession. The last time the group canceled was during the final months of World War II in 1945.

Temple said despite the tough times, the news still matters to people.

"I'm not pessimistic about the future of journalism at all," he said.