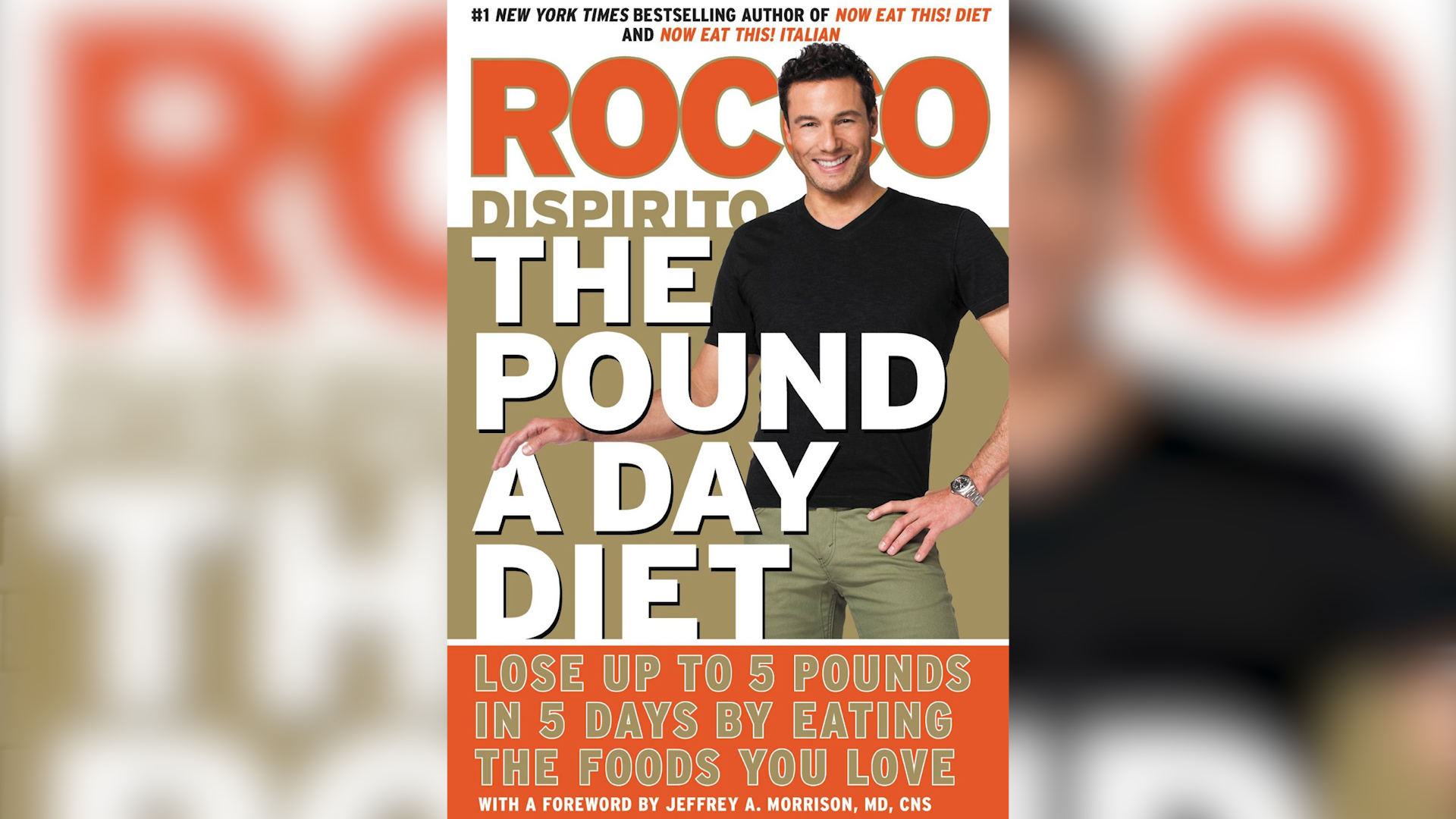 In an interview with CBS News, the celebrity chef and author of  “The Pound A Day Diet,” argued that “pound for pound,” healthy whole food is cheaper than processed meals, and worth the extra time it might take to prepare.

His New York Times bestselling diet promises to help participants “lose up to five pounds in five days" until reaching their goal weight, by following a series of menus for four five-day plans and four weekend plans. DiSpirito says he based the recipes -- which total about 850 daily calories on weekdays and 1,200 calories on weekends -- off the Mediterranean diet, which has been tied to health benefits.

He added that seeing the pounds come off motivates dieters to maintain healthy habits. However, calorie-restricted diets often raise questions over the safety and long-term effectiveness of rapid weight loss.

DiSpirito defends his plan as “a diet that’s built on a foundation of medicine, science and deliciousness."

Does food that helps your waistline have to hurt your wallet?

It’s a popular assumption, backed by a recent Harvard School of Public Health study which found that a healthy diet filled with fruits, vegetables, fish and nuts costs about $550 more a year than a typical U.S. diet filled with processed, foods, meat and refined grains.

DiSpirito however disagrees that healthy eating has to be more expensive.

“Pound for pound, healthy food, whole food, a head of broccoli, a whole chicken, is going to be much less expensive because you’re doing the processing,” he said.  “If you buy a package of hot pockets, and you compare pound to pound -- not serving size to serving size, which is what packaged food companies like to do, confuse people with serving size -- it’s entirely mathematical that you’ll get a lot more for your money with whole food than you will with processed food.

“Someone has to get paid to do the processing.”

DiSpirito isn’t alone in making the argument that healthy eating and dieting doesn’t have to bust budgets.

“There’s definitely ways people can eat healthy and have it cost even less," said Dr. Christopher Ochner, an assistant professor of pediatrics, adolescent medicine and psychiatry at Mount Sinai Hospital in New York, who focuses on nutrition research and weight loss.

“Are fruits and vegetables more expensive than frozen pizza? Yea.” said Ochner, who pointed out he's eaten healthily on a student's budget for the better part of his adult life. "But you can buy in bulk," he told CBS News.

Then there’s unhealthy eating's costs to society and families over the long term, said DiSpirito. The extra gasoline needed to transport the population’s extra pounds. The pricey medications prescribed to battle diseases linked to obesity.

“What does it cost a family when the primary income earner dies 20 years too soon?" he asked. "How much in potential income?”

What about all the time it takes to cook?

Fast food and processed foods are popular for a reason: They’re compatible with a busy day.

The Centers for Disease Control and Prevention estimates that adults get about 11 percent of their daily calories from fast food, with obese individuals having the highest percentage of their diets made up from these convenient meals.

With his “Pound a Day Diet,” DiSpirito said, he tried keep the recipes simple, and the cooking time to around five to ten minutes.

His rotisserie chicken and teriyaki noodles? “The slowest cook I know would take 15 minutes.”

Buy a roasted chicken from the supermarket, DiSpirito instructed, “pull it apart, you throw it in a bowl with miracle noodles, which are noodles that are made out of fiber and calorie-free. You add sugar-free Asian flavored sauce... and two other ingredients, broccoli slaw and cilantro, and you’re done.”

How do you make healthy also tasty?

For DiSpirito, the question of making delicious food healthy, and healthy food delicious, gained a personal importance when he got a wake-up call in 2006.

“I was faced with my own declining health due to obesity -- I was 41 pounds heavier, I had high blood pressure, high cholesterol levels,” DiSpirito said. “I was prescribed statin drugs, and blood pressure drugs that lower libido and have a lot of terrible side effects and when the picture was painted for me, I was given that option, the prescription medicine option or diet and exercise. And for once in my life, I made the right choice and picked diet and exercise.”

A year later, he was competing in an Ironman 70.3-mile triathlon. The problem was, the dieting part quickly grew old.

“I got tired of the smoothies after a few months of training for that Ironman so I started to make the food that I love healthy,” DiSpirito said. “And little by little I started to amass a number of dishes that were absolutely wonderful and much less calories.”

He applied his findings to the recipes in his new diet, keen on maintaining what he calls the “deliciousness factor.” Dishes include sour cream and onion sweet potato chips, bacon wrapped chicken, and a banana cream smoothie.

The diet, while rich in dishes with delicious names, is also low on calories. But, calorie-restricted diets are often criticized for concerns that the weight might come back once the diet ends.

Is losing a pound a day healthy or sustainable?

DiSpirito’s diet features an average daily calorie count of about 850, while the U.S. Government generally estimates daily caloric needs at above 2,000 calories per day for many adults. Depriving the body of those calories, DiSprito said, is the whole point, and accepted science.

It’s an approach that might sound extreme, but, DiSpirito said, it’s intended to combat an extreme condition: potentially life-threatening obesity.

Ochner, from Mount Sinai, said such a low-calorie diet can be safe for obese individuals and this particular diet contains a "pretty good" macronutrient breakdown of high protein, low fat and low carbohydrates.

But, he recommended for any calorie restricted diet, “It should definitely be done under physician supervision. There’s no doubt about that.”

“And it just makes sense on the merits right? When you get rapid results, you’re more motivated.”

The daily menu encourages eating smaller meals every two to three hours in an effort to boost metabolism and stave off hunger.

Ochner said the data overall has been mixed about what weight-loss method works best. He noted that the rapid approach may have an opposite-than-intended effect for some dieters.

“After two weeks on the diet, some pounds have come off, so now maybe I can ease off a little. I’ve been going nuts for two weeks, what if I back off a little bit. I don’t need to be as stringent about it,” Ochner said. “And that’s usually when you get a big big reversal.”

But for DiSpirito, healthy living all comes back to investing the time in healthy eating.

“It’s not a coincidence that the three countries with the lowest obesity rates are also the highest at home cooking rates: Italy, Spain and France. And they essentially live a lifestyle that is very sustainable, where they eat whole, fresh food every day, cooked at home. Imagine that,” said DiSpirito.

“If everyone did that, you wouldn’t need me and I’d be out of a job. But it would make me very happy, and it’s how I grew up.”

Ryan Jaslow contributed to this report.

The country where Down syndrome is disappearing
Alexander Trowbridge