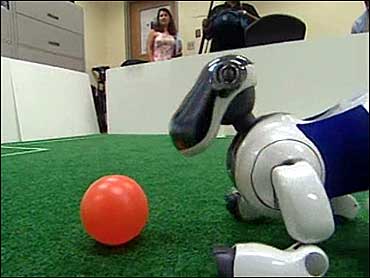 A robotic dog named Aibo may be as good as a real dog at easing loneliness in nursing home residents.

Some of the residents got one-on-one visits with Aibo every week for eight weeks. Aibo stayed in its recharging cradle during those half-hour visits; the robotic dog wasn't allowed to scurry around the room or bark.

Other residents got one-on-one visits from a real dog for the same amount of time. For comparison, a third group of lonely residents didn't get visited by Aibo or the real dog.

Lonely seniors who got visited by Aibo or the real dog became less lonely, according to their before-and-after loneliness ratings. The robotic and real dogs eased loneliness to a similar degree. But Aibo took some getting used to.

"Anecdotally, some residents and staff were initially reluctant to interact with Aibo; however, with exposure, this resistance largely dissipated," write Marian Banks, DNS, and colleagues in the March edition of the Journal of the American Medical Directors Association.