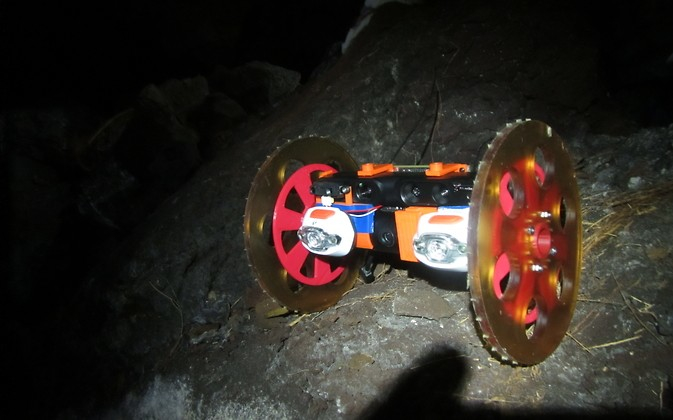 Scientists have a pretty good picture of what happens when a volcano erupts, shooting molten rock from its mouth and forming a massive cloud of dust.  But how the magma travels up before it bursts through the surface is a question they haven't been able to get close enough to answer.

Now, a small rolling robot can give scientists a (safe) view from the inside.

NASA researchers have found a new way to explore the depths of fissures, the volcanic vents through which lava erupts. They created a robot called VolcanoBot2 that can probe the dark hazardous structures filled with sharp rocks -- places where humans cannot reach.

"It can roll up and down the wall, turn, and even go backwards," said Carolyn Parcheta, a postdoctoral fellow at NASA's Jet Propulsion Laboratory. "It's really agile, and at the moment, it can go up to 100 meters deep."

Up until now, scientists have studied eruptions by gathering evidence from the surface of the area, otherwise known as field geology. They rely on seismic events, inclinometers to measure the strains in the rock, gas concentrations from the surface, and temperature to deduce what's going on and predict what could be coming next.

"As volcanologists we assume how magma comes up to the surface," Parcheta told CBS News. "We have lots of great chemistry and physics that explain how rock melts but we don't actually have documentation of how it moves through the earth or how volcanoes erupt."

That's why Parcheta invented the VolcanoBot2, a small recording device on 12 cm wheels with strong motors that can penetrate deep into a fissure. It has an infrared imaging camera that examines the structure of its surroundings and sends a live video feed to the surface, enabling scientists to remotely navigate along.

With this data, researchers can build a 3-D map of the fissure, in order to study and better understand the magma's movements.

Frustrated with being unable to trace the path of magma under the surface, Parcheta designed the first version of the robot while getting her PhD in volcanic fissure eruption.

"I was able to look at everything except what was underground," she recalled.

With the help of her co-advisors and Jet Propulsion Laboratory robotics researchers Aaron Parness and Karl Mitchell, Parcheta and her team built VolcanoBot1 and in May of last year took it to Hawaii and dropped it into an inactive fissure on the active Kilauea volcano.

The bot confirmed that the bulges in the rock wall seen on the surface were also present deep inside the ground. But then it conked out after traveling 85 meters.

"We started having electrical issues and it then stopped recording data," Parcheta said.

The new VolcanoBot2 is smaller and more robust with far better communication skills, even at greater depths.

Experts say getting data closer to the magma chamber is key to helping scientists predict future volcanic eruptions. "The closer you are, the more accurate and precise your measurements are, which leads to predictions being more accurate," geologist and director at Inflection Energy LLC Thomas Gillespie said.

Other experts say that in addition to changing the way researchers study these structures, VolcanoBot2 can make the science safer.

NYU's Rampino said, "When you study these volcanic craters, it's really dangerous and having something you can send in remotely to analyze the gas data could even save volcanologists lives."

Gillespie thinks that the next step should be to see if we could not only capture information but also obtain actual gas samples closer to the magma chamber, so scientists can measure the concentration and gas pressure to see whether more pathways and fissures are opening up.

But for now, Parcheta is looking forward to making a second journey to Hawaii in March, where the VolcanoBot2 will once again make its way down the Kilauea volcano.

"I think it will go really well," she said. "We'll definitely have better coverage of the data."