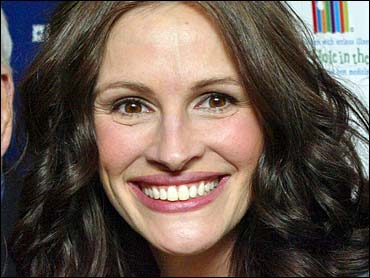 Julia Roberts, movie star, is heading to Broadway next spring. The 37-year-old actress will make her Broadway debut in a revival of Richard Greenberg's "Three Days of Rain."

The announcement by producers Marc Platt and David Stone was first reported Friday in The New York Times. Platt and Stone are the team responsible for the megahit musical "Wicked."

The production will begin a limited 12-week engagement next March at a theater to be named, the Times said, and will be directed by Joe Mantello, one of the theater's most sought-after directors. No other details, including other cast members, were announced.

Mantello directed the Broadway and touring productions of "Wicked" as well as "Take Me Out," Greenberg's Tony-winning drama about a gay baseball player. He will also direct the Nathan Lane-Matthew Broderick revival of "The Odd Couple," opening on Broadway in October.

It is one of the first acting gigs Roberts has committed to since giving birth to twins last December. Her screen hits include "Pretty Woman," "Steel Magnolias" and "Erin Brockovich" — for which she won an Oscar in 2001.