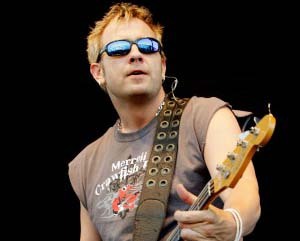 (CBS/AP) NASHVILLE, Tenn. - Robert Todd Harrell, bassist of the rock band 3 Doors Down, was charged with vehicular homicide on Sunday after causing a car crash that took the life of another man on the road Friday, according to police.

The accident took place last Friday. Harrell, 41, was reportedly under the influence of several narcotics including hard cider, prescription Lortab and Xanax, according to police reports.

The crash took the life of Paul Howard Shoulders Jr., 47, who was ejected from his pickup truck after the vehicle lost control. Police reports say he was not wearing a seat belt at the time of the crash.

Harrell was also charged for allegedly bringing drugs to jail. Authorities say he had hidden a bag of Xanax pills, 24 Oxycodone pills and four Oxymophorne pills during the search before entering the facilities.

According to reports the musician was held under a $100,000 bond. The 3 Doors Down website posted a statement saying "We are deeply saddened by the passing of Paul Howard Shoulders, Jr. Our hearts and prayers go out to his family and friends at this difficult time"

Harrell is scheduled to appear in court on Thursday.