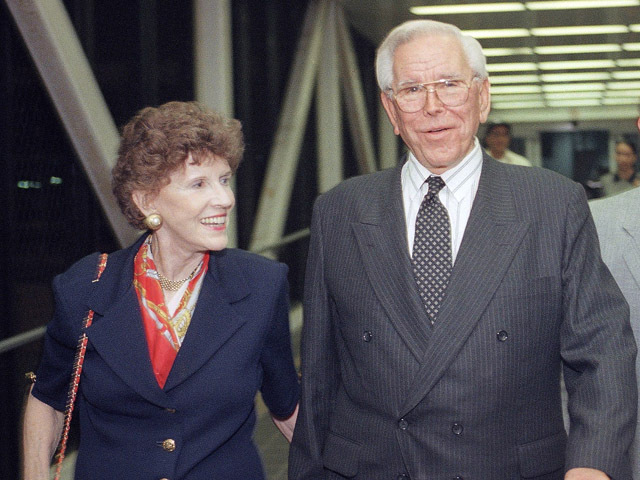 (AP) GARDEN GROVE, Calif. - Dr. Robert Schuller and his wife Arvella announced "with great sadness" Saturday that they resigned from the board of directors of the Crystal Cathedral, the televangelist ministry he founded four decades ago and made famous through his "Hour of Power" television program.

Their resignation was the latest upheaval for the financially-struggling megachurch, which sold its iconic home to the Roman Catholic Diocese of Orange last month to emerge from federal bankruptcy protection.

The Schullers' daughter, Carol Schuller Milner, said her parents were stepping down because they and the board couldn't reach a deal for housing benefits and fees for using her father's writings and sermons as part of the bankruptcy proceedings.

"We cannot continue to serve on the Board in what has become an adversarial and negative atmosphere especially since it now seems that it will not be ending anytime soon," Arvella Schuller said in a statement.

Schuller's attorney, Carl Grumer, said the pastor's future role with the ministry was "up in the air."

Calls to a Crystal Cathedral spokesman were not immediately returned.

Schuller retired in 2006 after seeing a weekly prayer service at an Orange County drive-in movie theater evolve into a televangelist empire broadcasting to viewers around the world from the glass-paned cathedral.

The church raked in millions in donations through its "Hour of Power" broadcasts but a series of financial setbacks led to the megachurch's filing for bankruptcy in October 2010 and the forced sale of its 40-acre campus.

Turmoil in the ministry included the firings of Schuller's daughter Gretchen Penner and two sons-in-law in the past week.