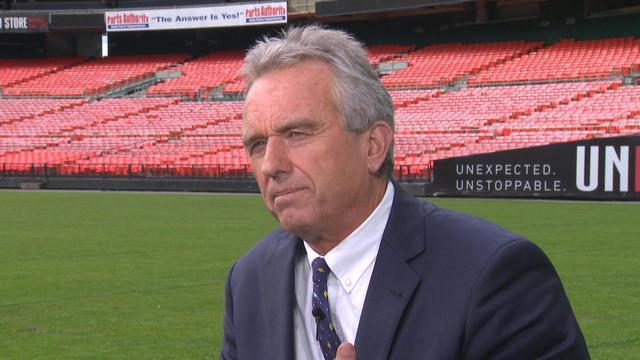 When Robert F. Kennedy was assassinated just minutes after winning California's 1968 Democratic primary, the United States was fiercely divided. Many looked to him to help heal that divide. That's part of an unfulfilled legacy his son, Robert Kennedy Jr., describes in his new book, "American Values."

"I think my father would be disappointed by what was happening in the political landscapes in our country today," Kennedy told CBS News' Michelle Miller.

They are strong words from the younger Kennedy whose family's legacy has been indelibly marked on American politics.

"He saw America as an exemplary nation…That we should know the difference between leadership and bullying, that we should try to promote democracy," he said.

His new memoir recounts the days known as Camelot – when his family was among the most powerful in the world – and the most tragic.

"My family had a lot of tragedies, and many American families do… My mother always said this after my dad died -- 'Everybody takes their licks' and that there's kids in Watts, in Harlem, and in Bed-Stuy who have lost their parents…They don't have the support system that we had in our family," he said. "I don't think a day goes by where I don't run into somebody who doesn't come up to me and say, 'You know, I'm a nurse. I went into public service because of your dad.'"

One of the reasons Kennedy said he wrote the book, "American Values," was for the Kennedy children who didn't get a chance to experience "Camelot."

"I think at the Cape in the summer there – you know, the last time we counted that there were something like 105. And the majority of them now, did not – never experienced Camelot. But at the same time it's a history of the Kennedys and particularly the 40-year tension between my family and the CIA," he said.

The Kennedy feud with the CIA was multi-generational. The family patriarch, Joseph Kennedy, sat on a commission that called for an end to the CIA's paramilitary operations. And his sons John and Robert Kennedy both railed against the CIA's role in Vietnam.

"Actually, my father, a week before he was killed….The first thing he was gonna do was to remove the clandestine services from the CIA and make the CIA what it was supposed to be, which was an intelligence gathering organization," he said.

"It's almost as if you have set up and detailed an enemy's list for those who may have had it in for your family," Miller said.

"There was a lot of enemies that my father made, and they weren't all CIA," he said.

But the seeds of doubt about who killed his father weren't planted by that notion.

"I never suspected at any level that anybody other than Sirhan Sirhan had killed my father until maybe three years ago," he said. What changed for Kennedy? "Well, Paul Schrade."

Schrade was a close friend of Robert Kennedy and was with the candidate the night he was shot. It was Schrade who took Sirhan's first bullet and it is Schrade who has insisted for decades that Sirhan could not have acted alone. He's now raised serious questions in Kennedy Jr.'s mind as well.

"Anybody who reads the autopsy report is – it's hard to believe that Sirhan shot my dad, that his bullets hit my dad. Because Sirhan was always in front of my father….And yet, all shots, all the four shots that hit my father came from behind him," he said.

But that doesn't mean he's reached a conclusion about what really happened – nor does he want to.

"My opinion is really irrelevant…What's important is what the facts say, what the autopsy says, what the ballistic evidence and what the eye witnesses say," he said. "I've asked for a re-investigation of the murder."

The Los Angeles Police Department said it does not have any more information to provide at this time. In a statement to CBS News, Sirhan Sirhan's attorney wrote, in part: "We are gratified that Robert Kennedy Jr., who has been made aware of the evidence which justifiably aroused our suspicions, agrees that the matter cries out for a deeper and unbiased investigation."

How retirement is keeping both Eli and Peyton Manning busy
Thanks for reading CBS NEWS.
Create your free account or log in
for more features.
View CBS News In
CBS News App Open
Chrome Safari Continue
Be the first to know
Get browser notifications for breaking news, live events, and exclusive reporting.