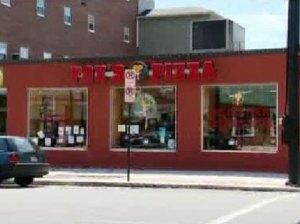 The employees of Fox's Pizza in Indiana, Pa. were standing outside early Sunday morning when the fire alarm went off. That was when the 21-year-old Smith and 18-year-old Goodwine approached them.

Indiana police said one of the suspects put the victims into headlocks while the other recorded the robbery on a cellphone. Police said $20 was taken from one of the victims.

Although the reality show was a hoax, the robbery was very real. Smith and Goodwine took off but were quickly arrested by Indiana police.

The suspects are facing robbery and related charges. Smith posted bail but Goodwine remained in the Indiana County Jail on Monday, about 45 miles northeast of Pittsburgh.