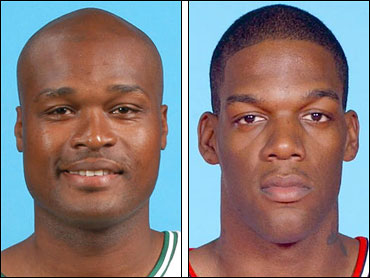 Two hulking NBA stars were bound with duct tape and robbed of cash and jewelry by masked gunmen in separate holdups that have Chicago-area detectives wondering whether someone is targeting professional athletes.

New York Knicks forward Eddy Curry — 6-foot-11, 285 pounds — was tied up along with his wife and an employee at his mansion in suburban Burr Ridge on Saturday.

Miami Heat forward Antoine Walker, who is 6-foot-9, 245 pounds, was similarly robbed along with a relative at his $4 million townhouse in Chicago's exclusive River North section on July 10.

No one was injured in either case.

"Our guys are talking to Chicago to determine if it's just a copycat or a coincidence or if there is a relationship there," Burr Ridge police Cpl. Tim Vaclav said.

Police said the gunmen — three in the Curry holdup, two in Walker's case — probably knew exactly who their victims were. Curry used to play for the Chicago Bulls. Walker was born in Chicago and starred at Mount Carmel High School on the city's South Side.

No details on what was taken from Curry were released. In the robbery at Walker's home, the gunmen took his Mercedes-Benz sports car, which was later recovered, and other items, including a $55,000 wristwatch.

A few days later, police recovered some of Walker's jewelry during a traffic stop on the city's South Side. A woman was arrested, but police said they do not believe she in the house when Walker was robbed, and they would not give any further information.

Chicago police spokeswoman Monique Bond said detectives from Chicago and Burr Ridge are comparing notes but have found no connection between the robberies so far.

NBA spokesman Tim Frank said the league's security department has contacted authorities in Chicago about the two robberies. He added: "When something like this happens, I'm sure our security department tries to get the most up-to-date information to teams so they can tell players and staff, properly educate them."

Dan Wasserman, a spokesman for the NBA Players Association, said the union will contact every NBA player who lives in the Chicago area to let them know about the home invasions and answer any questions they have about security.

In 2000, NBA star Stephon Marbury reported that someone reached into his Bentley when he was stopped at a red light in New York City and grabbed a diamond necklace the player said was worth $150,000. Last February, Philadelphia 76ers forward Joe Smith reported that four pieces of custom-made jewelry worth $110,000 were missing from his Philadelphia hotel room.

In Los Angeles, a burglary crew over the past year has made off with millions in cash, jewelry and other items in burglaries in wealthy neighborhoods. The Los Angeles Times reported that $500,000 in cash and jewelry was stolen from the home of Los Angeles Clippers star Cuttino Mobley.

Curry's agent Lamont Carter said Curry had no immediate plans to return to his "dream house."

"He feels violated," Carter said. "He's relieved and happy that his family's OK. He's just relieved to be living."

Walker's robbery was so traumatic that the three-time All-Star said he was not sure if he could ever return home.

"I don't feel safe," he told reporters shortly afterward. "I feel violated a little bit. And now it's all over the news, so everybody knows where I live. I think it would be best for me to move on." 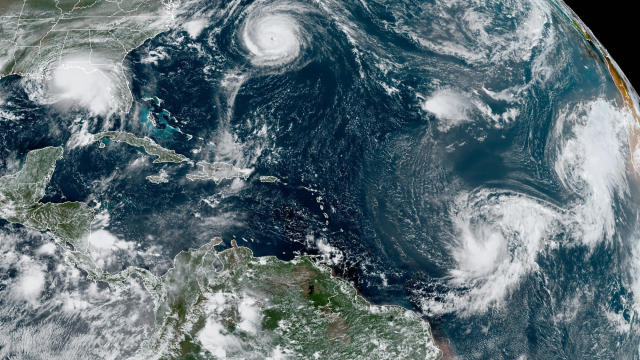 Oceans are out of balance — and that means stronger storms

Oceans store 1,000 more heat than the atmosphere and ultimately control our climate destiny.