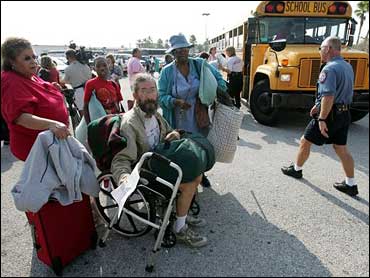 As many as 1 million people were ordered to clear out along the Gulf Coast, and hospital and nursing home patients were evacuated Wednesday as Hurricane Rita turned into a Category 5, 165-mph monster that could slam Texas by the weekend and inflict more misery on New Orleans.

Forecasters said Rita could be the most intense hurricane on record ever to hit Texas, and easily one of the most powerful ever to plow into the U.S. mainland. Category 5 is the highest on the scale, and only three Category 5 hurricanes are known to have hit the U.S. mainland — most recently, Andrew, which smashed South Florida in 1992.

All of Galveston, low-lying sections of Houston and Corpus Christi, and a mostly emptied-out New Orleans were under mandatory evacuation orders, one day after Rita sideswiped the Florida Keys as a far weaker storm and caused minor damage.

Having seen what 145-mph Hurricane Katrina did three weeks ago, many people were taking no chances as Rita swirled across the Gulf of Mexico.

"After this killer in New Orleans, Katrina, I just cannot fathom staying," 59-year-old Ldyyan Jean Jocque said before sunrise as she waited for an evacuation bus outside the Galveston Community Center. She had packed her Bible, some music and clothes into plastic bags and loaded her dog into a pet carrier.

"I really think it is going to be bad. That's really why I'm running. All these years I've stayed here, but I've got to go this time," said 65-year-old Barbara Anders. "I don't have but one life, and it is time for me to go."

The federal government was eager to show it, too, had learned its lesson after being criticized for its sluggish response to Katrina. It rushed hundreds of truckloads of water, ice and ready-made meals to the Gulf Coast and put rescue and medical teams on standby.

CBS News correspondent Mark Knoller reports that President Bush has issued emergency declarations for Texas and Louisiana in advance of Hurricane Rita, authorizing the Department of Homeland Security and The Federal Emergency Management Agency to coordinate all disaster relief efforts.

The Department of Homeland Security said FEMA and Texas authorities are beginning to relocate 8,160 Hurricane Katrina evacuees to other states "to secure them from the impending path of Hurricane Rita." FEMA says the people will receive food, water, shelter and other necessities at their new locations.

FEMA sent nearly 1,200 medical and rescue personnel into and asked the Pentagon to send 2,500 hospital beds to potential disaster zones in Louisiana and Texas, and was sending 200 buses to the Lone Star State to move residents out of harm's way.

Texas has even recalled hundreds of its emergency workers helping other states with Katrina, because they may be needed at home, reports CBS News correspondent Mark Strassmann.

CBS News' Portia Siegelbaum reports some 130,000 people were evacuated in Cuba, on the southern side of the Florida Straits. The storm churned up roiling waves and soaked the northern coast as it made its way past Havana, but no storm related deaths have been reported.

Electricity, gas and water services were interrupted in neighborhoods around the capital of 2 million and some streets were flooded. Havana's international airport was closed to incoming and outgoing flights.

Rita created relatively few problems along the Florida Keys, where thousands of relieved residents who evacuated are expected to begin returning in earnest on Wednesday.

During daytime hours, several stretches of the Keys highway, U.S. 1, were barricaded because of water and debris; by nightfall, only one small problem area remained and the entire highway was passable, the Florida Highway Patrol said.

There were reports of localized flooding, and some sections of the Lower Keys were still without power early Wednesday. But the storm's raging eye did not hit land.

"It was fairly nothing," said Gary Wood, who owns a bar in Marathon, about 45 miles northeast of Key West. "It came through and had a good stiff wind, but that was about it."

In Key Colony Beach, an oceanfront island off Marathon, Mayor Clyde Burnett said a restaurant and hotel were damaged by water and wind, but that widespread problems simply didn't arrive as expected.

"It could have been worse. We could have lost our whole house," Keys resident Jackie Hanna told CBS News.

Visitors ordered out of the Keys will be invited back Friday, and virtually all other voluntary evacuation orders in South Florida were lifted after Rita roared past.

Now, all eyes following Rita are turning toward the Gulf — where the hurricane is causing new anxiety among Katrina victims in Mississippi, Louisiana and Alabama.

CBS News reports that during a 5 p.m. discussion at the National Hurricane Center in Miami, Rita is expected to maintain its strength because it is cross an area of high heat content during the next 12 to 24 hours. After that, the ocean heat content isn't has high, and intensity changes will be mainly determined by eyewall replacement cycles.

"There's still plenty of warm water that it needs to move over in the next couple days. The forecast is favorable for further intensification," said Michelle Mainelli, a meteorologist at the National Hurricane Center.

Those were words that Gulf coast residents certainly did not want to hear. Even those who had survived major hurricanes were getting ready to leave, not wanting to challenge Rita's potential wrath or cling to hope that they'd be spared in the same manner the Keys were.

"Destination unknown," said Catherine Womack, 71, who was boarding up the windows on her one-story brick house in Galveston. "I've never left before. I think because of Katrina, there is a lot of anxiety and concern. It's better to be safe than sorry."

The hurricane season isn't over until Nov. 30.