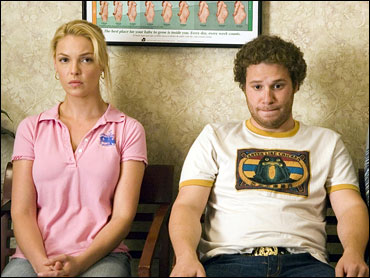 In comedy, Hollywood has learned that raunch sells.

Studios prefer their funny flicks in the benign PG-13 mold, a rating that keeps the audience broad to fill as many seats as possible. More and more, however, they are taking chances on R-rated comedies that ratchet up the rawness, allowing the "Sex and the City" gal pals to strut their stuff, Will Ferrell and John C. Reilly to expose body parts in "Step Brothers," or Tom Cruise to swear like a sailor.

"He was willing to go for it," "Tropic Thunder" star and director Ben Stiller said of Cruise, who is almost unrecognizable as a bald studio executive with a colossal talent for cussing. "I think the audience will really enjoy him letting loose like that."

While Hollywood executives usually soft-pedal comedy, figuring the PG-13 rating offers the best return on their investment, racier hits such as "Wedding Crashers," "The 40-Year-Old Virgin" and "Knocked Up" prove there's a place for R-rated humor.

With $56.8 million over opening weekend in May, "Sex and the City" had the best debut ever for an R-rated comedy. The movie has racked up a total of $151 million, ranking among the top-50 highest-grossing comedies ever.

"Pineapple Express," with Seth Rogen and James Franco as stoners on the run, and "Tropic Thunder," about pampered actors caught in real combat with drug-runners while shooting a Vietnam War picture, have great buzz from advance screenings, arriving in theaters over back-to-back weekends with prospects of joining the R-rated hit parade.

Both comedies are loaded with violence, coarse language and outrageous gags that the filmmakers could never have touched in a PG-13 movie.

Stiller's breakout role came with 1998's R-rated "There's Something About Mary," but his biggest hits are milder - the blockbusters "Meet the Fockers" (rated PG-13) and "Night at the Museum" (rated PG).

Hollywood has scored occasional comedy hits with R-rated flicks such as "National Lampoon's Animal House" and "Porky's." But studios became more emboldened to venture into R territory in the last decade with the "American Pie" comedies and the early "Scary Movie" spoofs.

The wave of R-rated hits over the last few summers includes "Borat: Cultural Learnings of America for Make Benefit Glorious Nation of Kazakhstan" and "Superbad."

"If you look at most of these R-rated movies that found an audience, it's because they were really good," said producer Peter Safran, whose credits include "Scary Movie" and the upcoming PG-13 comedy "Disaster Movie." "The R rating allows the filmmakers to truly realize their vision. There's just a freedom that comes with it. There's no way 'Wedding Crashers' could have been 'Wedding Crashers' if you inhibit what it was that Owen Wilson and Vince Vaughn were able to do in that movie."

PG-13 comedies are not likely to lose their dominance. It's simple number-crunching for Hollywood: An R rating means anyone younger than 17 must be accompanied by an adult, while a PG-13 movie is open to anyone, including teens who make up a huge segment of weekend audiences and might balk at having to tag along with their parents to the theater.

"Step Brothers" director Adam McKay said studio executives offered a precise math lesson on what they would be losing by doing an R-rated movie rather a PG-13 one. The studio accurately forecast an opening weekend in the $30 million range, as opposed to the $40 million it might have brought in as a PG-13 comedy.

R-rated comedies have to be priced accordingly, the studios willing to put up $50 million to $60 million to make the movies instead of the $90 million they might shell out for one with a broader rating, McKay said.

It was a sacrifice McKay and Ferrell were willing to make after doing two PG-13 movies together, "Talladega Nights: The Ballad of Ricky Bobby" and "Anchorman: The Legend of Ron Burgundy."

"We were like, gosh, everyone's getting to have their cake and eat it, too, with '40-Year-Old Virgin' and 'Wedding Crashers,"' Ferrell said. "Just this little opening seemed to happen with the way the studios were willing to go, 'OK, R-rated movies seem to be profitable, so we'll maybe open that door a little bit."'

For "Sex and the City," it was a matter of staying true to the bawdy TV show, with its nudity and explicit dialogue as a foursome of randy women slept around Manhattan then gathered to talk about their flings.

While the characters had settled into monogamous relationships in the movie, the leap to the big-screen had to come tagged with an R rating, said star Sarah Jessica Parker.

"There was no talk of toning it down. There was no intention of making a conventional movie in an attempt to reach a mass audience," Parker said. "We wouldn't have wanted to do something that didn't reflect the show and didn't respect the audience's investment in the show and what made it different and unique."

"Step Brothers" star Reilly said the R rating gave him, Ferrell and their collaborators the liberty to take their comedy improvisation to extremes.

"Anything's possible, and so more than wanting to make it an R-rated movie, we just wanted the freedom to make it whatever it's going to be," Reilly said. "Also, comedy's job is to push boundaries. We didn't make the boundaries. We didn't move the last boundary, but here we are. People are expecting something a little crazier than the last thing they saw."
By David Germain