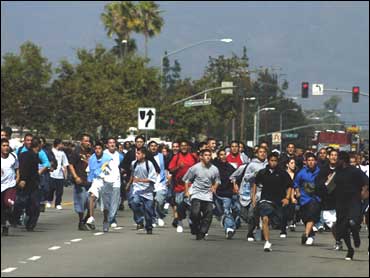 A fight between two high school students erupted into a riot of 500 people, prompting officers to fire bean bags and rubber pellets to scatter the crowd, police said. No major injuries were reported.

About 100 officers rushed to Fontana High School on Friday after students threw rocks and bottles at other officers and one another, according to Fontana police Sgt. Doug Wagner.

Police were investigating the cause of the fight.

"We don't know if it was gang related or if it was racially motivated," Wagner said. "Some people were unhappy with one another, a fight broke out and it spilled over."

Two students were arrested for investigation of assault with a deadly weapon, and four others were arrested for refusing to disperse and resisting arrest, Wagner said. Their names were not released because they are minors, he said.

The brawl forced school officials to lock down the campus, and school was closed several hours early, he said.

Fontana is about 50 miles east of Los Angeles.