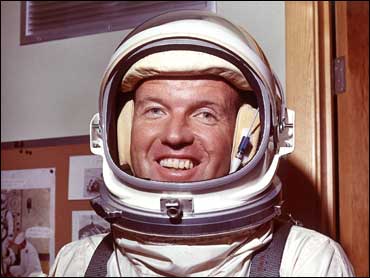 Gordon Cooper, who was the youngest and perhaps cockiest member of the original seven Mercury astronauts and set the space endurance record that helped clear the way for the first moon landing, has died. He was 77.

Cooper died Monday at his home in Ventura, NASA officials said in a statement. He died of natural causes, said Mitch Breese, of the county medical examiner's office.

Cooper had been suffering from heart problems and showed symptoms of heart failure on Saturday and Sunday, former Mercury astronaut Wally Schirra said.

"We were probably the most bonded seven men in the history of aviation and space and mankind, and to lose another one is pretty tough for us," Schirra told Associated Press Radio.

John Glenn, who was also in the Mercury program side by side with Cooper, said the passing of the man they knew as "Gordo" is a "tragic loss."

As one of the first U.S. astronauts, Cooper became a hero to a generation of Americans in the early 1960s as the country tried to catch the Soviet Union in the space race.

"He truly portrayed the right stuff, and he helped gain the backing and enthusiasm of the American public, so critical for the spirit of exploration," NASA Administrator Sean O'Keefe said.

"The Mercury missions were pioneering flight, showing us what was needed to keep astronauts alive," said CBS News Space Correspondent Bill Harwood, describing Cooper as "a natural pilot" with the reputation of being one of the best pilots in the Mercury program.

On May 15, 1963, Cooper piloted Faith 7, the Mercury program's last flight, circling the globe 22 times in 34 hours and 20 minutes. The mission, the first space flight of more than 24 hours, made him the last astronaut to orbit Earth alone and the first to take a nap during the journey.

Cooper became the first man to make a second orbital flight two years later during the Gemini 5 mission, when he and Charles Conrad established a space endurance record by traveling more than 3.3 million miles in 190 hours, 56 minutes.

The flight proved humans could survive in a weightless state for the length of a trip to the moon and tested a new power source for future flights - fuel cells. It also let the United States take the lead in the space race by surpassing the Soviet Union in man-hours in orbit.

Glenn, the first American to orbit the Earth and a former U.S. senator, recalled that the onboard clock was not working properly for the Faith 7 mission. Cooper relied on Glenn's voice for a manual countdown for the timing of firing rockets that would ensure landing in the right spot.

"He followed my count and hit the button on 'zero.' It worked; he got back," Glenn said.

Cooper's rambunctious attitude was immortalized in Tom Wolfe's book "The Right Stuff" and the 1983 movie of the same name.

Cooper in 1994 told The Associated Press that he collected quite a few speeding tickets and buzzed the launch pad the day before blasting off on the final Mercury flight. There was more, Cooper said at the time, "but nothing I'm going to tell."

Cooper gave his signature line during a 1995 reunion of surviving Mercury astronauts. When asked who was the greatest fighter pilot he ever saw, Cooper enthusiastically answered, "You're looking at him!"

Schirra said Cooper was not as rowdy as actor Dennis Quaid portrayed him in the movie.

"He's much less emotional and much less flyboy stuff," Schirra said. "He was a nice, steady engineer. He was more of an engineer than a test pilot, actually."

Cooper died ironically on the same day as a flight in part inspired by his own achievements and those of the other early astronauts: the triumph of SpaceShipOne, which won a $10 million prize as it set a new milestone in private space exploration.

"Gordon Cooper's legacy is permanently woven into the fabric of the Kennedy Space Center as a Mercury Seven astronaut," said center director Jim Kennedy. "His achievements helped build the foundation of success for human space flight that NASA and KSC have benefited from for the past four decades."

Cooper, born March 6, 1927, in Shawnee, Oklahoma, joined the Marines during World War II and transferred to the Air Force in 1949. He earned a bachelor of science degree in aeronautical engineering from the Air Force Institute of Technology in 1956.

He then flew numerous flights as a test pilot in the Flight Test Division at Edwards Air Force Base near Los Angeles. Cooper was selected as a Mercury astronaut in April 1959.

Cooper is survived by his wife, Suzan, and their children.