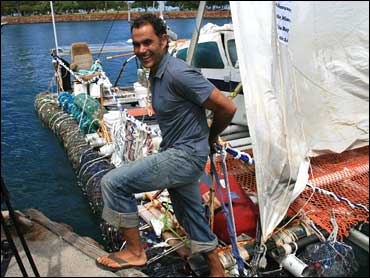 Tanned, dirty and hungry, two men who spent three months crossing the Pacific on a raft made of plastic bottles to raise awareness of ocean debris finally stepped onto dry land.

"We made it," hollered Marcus Eriksen to a crowd of about two dozen gathered at Ala Wai Harbor on Wednesday. "Where's the food?"

Friends greeted Eriksen and fellow eco-mariner Joel Paschal with lei, fresh food and beer to celebrate the end of their 2,600-mile voyage on what they call the JUNK raft.

"We got used to eating fish and peanut butter," said Eriksen, who celebrated his 41st birthday at sea.

The pair left Long Beach, California, on June 1. Their 30-foot vessel had a deck of salvaged sailboat masts, six pontoons filled with 15,000 plastic bottles and a cabin made from the fuselage of a Cessna airplane.

While at sea they realized they were only traveling half a mile per hour and it would take them much longer to reach Hawaii than the previously anticipated six weeks.

"We had to go to half-rations for awhile," said Paschal, 32.

Without a backup plan, the two used a satellite phone to get in touch with Roz Savage, who was crossing the Pacific solo in a rowboat and happened to be in the same area at the time.

Savage, who was heading from San Francisco to Hawaii, was in dire need of water after both her potable water makers broke. When the three met up, Savage got onboard the raft, Paschal speared a mahimahi and the three dined together. Before parting, the men gave Savage a water maker and she gave them some of her extra food.

"We exchanged the necessities of life," Eriksen said. "And that kept us going."

Food wasn't the only problem the men encountered on their trip. The raft, which can only sail downwind, had a hard time leaving the Long Beach area. The raft encountered storms that tore it apart during the first two weeks. Some of the bottles that were supposed to help the raft stay afloat started to sink. Eriksen and Paschal had to anchor the raft 100 miles off shore and rebuild it, before setting sail again.

She said the goal of the trip was to creatively raise awareness about plastic debris and pollution in the ocean. Ironically, this was the same goal that Savage had in her trek across the Pacific. 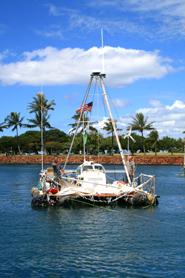 (AP Photo/Britt Yap)
The three want "single-use plastics" to be banned, saying they're wasteful and usually end up in the ocean.

"Recycling is one solution, but it's just a small part of the puzzle," Paschal said.

Each day the men posted online videos and blogs of their trip and kept in touch with Cummins. They also spent two to three hours a day maintaining and repairing the raft.

The men said a variety of marine life gathered under the raft throughout the trip.

One day, said Paschal, they caught a fish after watching it grow for five weeks. They were going to eat it, but when they cut it open they found its stomach was full of plastic confetti.

The team hopes to visit schools around Oahu and share their experiences, and is working on a documentary film about the voyage to raise public awareness of the danger of plastics.
By Associated Press Writer Britt Yap