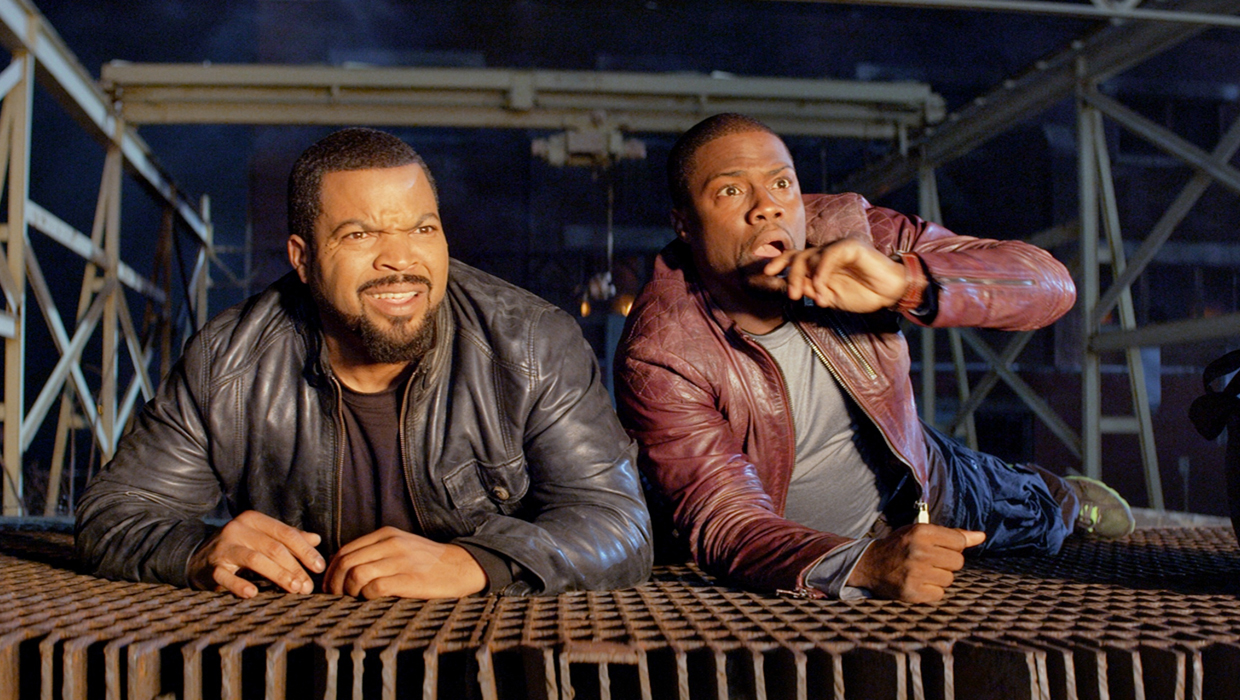 "Ride Along" remained strong at the box office over Super Bowl weekend, steering into the No. 1 slot for a third week.

Topping multiplex sales since setting a January debut record when opening over the Martin Luther King holiday weekend with $48.6 million, the Universal Pictures buddy cop comedy, starring Kevin Hart and Ice Cube, made $12.3 million, as it nears a $100 million domestic total, according to studio estimates Sunday.

"I don't think anyone would have seen that coming," Paul Dergarabedian, senior media analyst for box-office tracker Rentrak, said of "Ride Along."

Despite the looming viewpoint that films with a primarily African-American cast don't do well overseas, the domestic success of "Ride Along" could fuel its popularity internationally. (It is currently only showing domestically.)

"Kevin Hart and Ice Cube are great stars and they are international stars at this point. The movie doing so well here is going to give it that extra push. If the worldwide audience is hearing that 'Ride Along' is the No. 1 movie for the third week, they are going to want to see what the fuss is about."

Disney's "Frozen," now the fourth highest-grossing domestic animated release ever, is in second place with $9.3 million. The studio rereleased a singalong version of the film, as the movie's soundtrack remains No. 1 on the Billboard 200 chart. The film's signature track "Let It Go," sung by Idina Menzel, is among the top 30 on Billboard's Hot 100 (and is nominated for best original song at next month’s Oscars). "Frozen" singalong shows, featured in 2,057 theaters out of 2,754, added $2.2 million, as the film crossed the $360 million mark domestically.

"'Frozen' is a movie that will not quit," says Dergarabedian. "It's been out for 11 weeks and it's still relevant. By adding this sing-along component, they basically assured themselves a No. 2 spot this weekend."

Focus Features' chick flick from a male point of view, "That Awkward Moment," starring Zac Efron, Michael B. Jordan and Miles Teller, has taken third place in its opening weekend with $9 million.

"The critics were not kind to this movie and it's sort of a pre-Valentine's Day film that's an antidote to the Super Bowl," Dergarabedian said. "But over what is traditionally not a huge grossing weekend, it did in line with what people expected."

Universal's "Lone Survivor" stands strong in the fifth slot with $7.2 million, as it notably crosses the $100 million mark, making this Mark Wahlberg's 7th film to cross that milestone. Others have included "Planet of the Apes," ''Ted," ''The Departed," ''The Other Guys" and "The Italian Job."

Paramount's resurgence of the film adaptations of Tom Clancy's Jack Ryan series, "Jack Ryan: Shadow Recruit," this time starring Chris Pine as the resourceful CIA analyst, came in at No. 6 with $5.4 million in its third week. Overseas it made $9.1 million.

Riding the Oscar nominations wave were the No. 8 and 9 films: "American Hustle," leading the Oscar pack with 10 bids, and "The Wolf of Wall Street," which has five nods. David O. Russell's con-artist comedy earned $4.3 million, while Martin Scorsese's movie gained $3.6 million.

Rounding out the top 10, and dropping from last week's position six, was Lionsgate's big-budget "I, Frankenstein," with $3.5 million in its second weekend. With an estimated $65 million cost, "I Frankenstein," in 3-D and starring Aaron Eckhart, has a $14.5 million domestic total. But the film could gain a spike in sales overseas over the coming weeks, as it earned $13 million internationally when it hit theaters.

Overall, the estimated box office total for the weekend is $88.5 million, down slightly from this same Super Bowl weekend last year, which saw an $88.6 million total.

"This is a weekend where all eyes are on football, so the fact that industry held its own again on this weekend is pretty impressive," Dergarabedian said.

Next weekend's release of Warner Bros. 3-D animation "The Lego Movie," a family comedy, will most likely knock "Ride Along" from No. 1.

Estimated ticket sales for Friday through Sunday at U.S. and Canadian theaters, according to Rentrak. Where available, latest international numbers are also included. Final domestic figures will be released Monday.