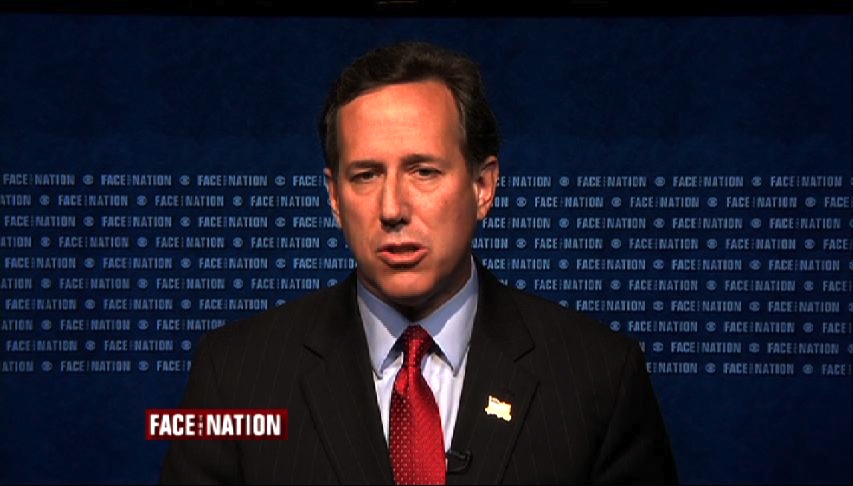 Rick Santorum said the best way to ensure Americans' safety is to expand the number of people who carry guns.

"I think a well-armed family is a safe family; a well-armed America is a safer America. I think if you look at anything, from all of these attacks that have taken place, is if people actually had had weapons there those attacks would have been thwarted and people's lives would have been saved," the former U.S. senator and presidential candidate said in an interview on CBS' "Face the Nation."

He said there are "millions of lives" saved in America each year by gun owners who have prevented crimes and stopped events by being armed. He also argued that a wider population of people carrying guns could deter shooters.

"If we are a country where the criminal doesn't know whether someone has a gun or not, they're going to think twice about opening fire or not because they won't be able to accomplish what they want," he said. "It's a wrong-headed approach that somehow or another, if we take guns away from people, law-abiding people who want to protect themselves, that the world's going to be safer. In fact, just the opposite is the case."

He used, as an example, the shooting at a movie theater in Aurora, Colo., in 2012, that left 12 dead and dozens more injured. Santorum argued that the shooter, James Holmes, knew no one there would have a gun.

Host Bob Schieffer asked whether someone like Holmes - whose attorneys argue is mentally ill - would be deterred by the knowledge that they could face gunfire in retaliation.

"You know, just because someone has a mental problem doesn't mean that they don't look at the situation and make an assessment. I don't think they completely lack capacity. So, no, I think people do analyze the situation, and if they want to accomplish something, they want to kill a lot of people, they're not going to go into a place that has someone who's going to shoot back," he said.

Santorum and his wife both have conceal carry permits "because we believe we have an obligation to protect ourselves, just like everybody else does," he said. He said that a new Georgia law that will allow licensed gun owners to carry weapons into bars, some government buildings and places of worship if religious leaders say it's okay will not encourage more shootings.

Santorum is currently promoting his new book, Blue Collar Conservatives, which argues that Republicans are focusing too much on job creators and should pay more attention to working Americans.

"That's the problem with Republicans: We aren't unifying. I think the Democrats divide labor and management, they're always dividing. We need to have a unifying message that talks more about average, working folks who are being left behind by both parties, in my opinion," he said. "The Democrats just want to throw money at them; the Republicans aren't talking about them and how we're going to create opportunities for folks who are falling back as a result of President Obama's policies."

The number-two finisher in the 2012 Republican primary said he's writing a book "because I believe America's in trouble," not because he has an announcement on another presidential bid just yet. But Santorum has actively considered another run at the White House, and said he plans to "stay engaged in this process."

"We'll make a decision next year as to whether we run or not. But I'm going to stay very, very engaged, and hopefully Republican candidates across the country will get this book, look at it, and begin to talk to folks who should be voting for us and should be helping us to change America, but are not," he said.