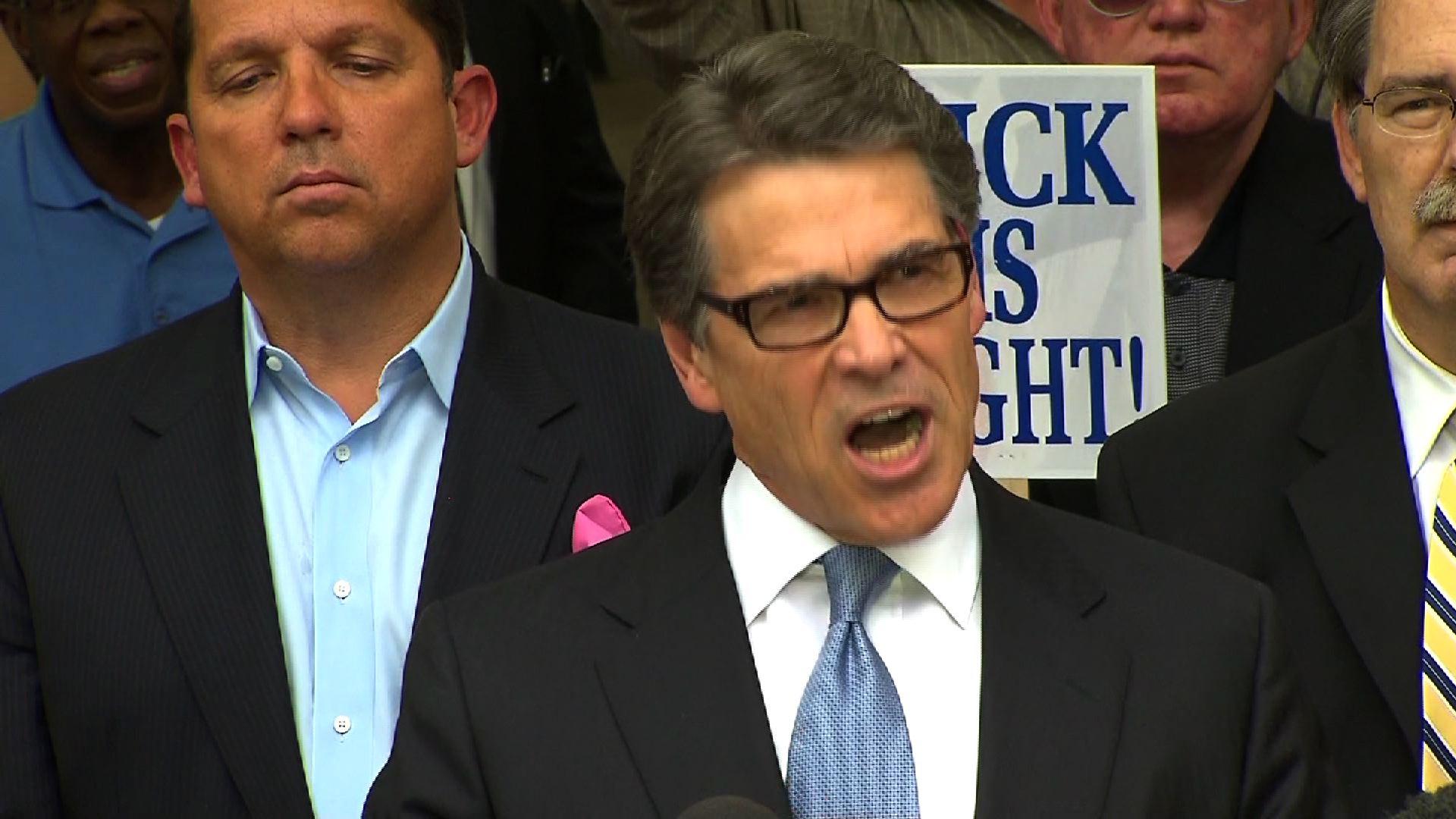 Gov. Rick Perry, R-Texas, turned himself in Tuesday afternoon to be booked and have his mug shot taken at the Travis County Justice Center. The governor was indicted last Friday on two felony counts of abuse of power, which he called "baseless political charges."

"I'm going to enter this courthouse with my head held high knowing the actions that I took were not only lawful and legal, but right," Perry added, promising promised that he would veto funding for the Travis County-based Public Integrity Unit again if was given the chance.

Prosecutors allege that Perry abused his powers by calling on Travis County District Attorney Rosemary Lehmberg to resign after she was arrested for and pleaded guilty to drunk driving in April 2013. When she did not step down, Perry vetoed the $7.5 million in funding for her office.

A crowd of supporters cheered Perry on as he spoke outside the courthouse Tuesday. His mug shot is expected to be released later Tuesday evening.

Perry maintains that the indictment is a political attack that infringes upon his right of free speech as both a governor and a private citizen.

"This indictment is nothing short of an attack on the constitutional powers of the office of governor," Perry added. "There are important fundamental issues at stake. And I will not allow this attack on our system of government to stand. I'm going to fight this injustice with every fiber of my being. And we will prevail. We'll prevail because we're standing for the rule of law," he said.

A judge decided Monday not to issue an arrest warrant.

Perry's legal team includes a number of well-known attorneys, including Ben Ginsberg, who has long been a staple in Republican politics. He represented former President George W. Bush in the 2000 Supreme Court case that awarded him the presidency, served as counsel to Republican presidential nominee Mitt Romney in 2008 and 2012, and acted as the co-chair of President Obama's election reform commission.

"This is an outlandish prosecution. It will never, ever ever stand," Ginsburg said Tuesday on "CBS This Morning."

"It is unprecedented, it is outside the bounds. I think that's why you see so many people who are not Rick Perry supporters, who are Democrats, saying how wrong this indictment is."

Perry has indeed highlighted the fact that even David Axelrod, a former adviser to Mr. Obama, called the indictment "pretty sketchy" on Twitter. Republicans have been quick to defend him as well.

Even the New York Times, making clear they are no fan of Perry's governing tactics, says his prosecution is wrong.

"Gov. Rick Perry of Texas is one of the least thoughtful and most damaging state leaders in America, having done great harm to immigrants, abortion clinics and people without health insurance during his 14 years in office. But bad political judgment is not necessarily a felony, and the indictment handed up against him on Friday -- given the facts so far -- appears to be the product of an overzealous prosecution," the paper wrote in an editorial.

Former House Majority Leader Tom DeLay, R-Texas, himself the target of a Travis County grand jury indictment in 2005, said the case is simply a "vendetta."

"There is no doubt [the case] is politically motivated," he told Fox News. "Once again, the district attorney of Travis County presented a case, not unlike mine, that was very weak, if it was a case at all. ... It's a conspiracy to use the legal system to politicize politics."

DeLay's conviction was reversed in 2013 after the Texas Court of Appeals said the evidence in his case was insufficient. DeLay's fight isn't over, however, as prosecutors in June asked a Texas court to reinstate his conviction.

"You'd think any governor, Democrat or Republican would expect this important unit with jurisdiction over state officials be led by someone who lives up to the highest standards of conduct and personal integrity. And this issue is far bigger than me," Perry said Tuesday.

His arraignment has been set for Friday, although he does not need to appear in person. Perry, who's mulling a presidential bid, is scheduled to head to the first-in-the-nation primary state of New Hampshire Friday.