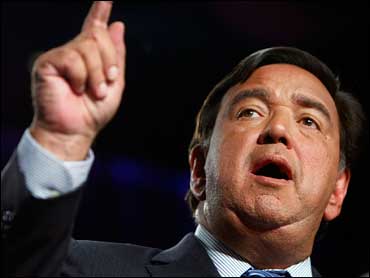 Democratic presidential hopeful Bill Richardson taps into the liberal blogosphere's frustration with the war and distrust of the media in a new television ad starting Wednesday in New Hampshire.

Richardson, the New Mexico governor whose campaign has struggled to catch up with better polling rivals, takes a page from Howard Dean's 2004 anti-establishment rhetoric and appeals directly to the liberal activists. He taps well-known liberal writers to speak on his behalf.

"The media is (sic) silent, but Democratic activists speak out," an announcer says in the new 30-second ad, introducing Matt Stoller of OpenLeft.com.

Stoller says Sens. Hillary Rodham Clinton and Barack Obama and former Sen. John Edwards all tell voters they want to end the unpopular war in Iraq, "but they support leaving thousands, even tens of thousands of troops behind. That doesn't make any sense."

Clinton has said that she would retain a military force in Iraq to fight al Qaeda and deter any Iranian aggression. Obama would leave a military presence to protect U.S. personnel and train Iraqi troops, and Edwards would leave personnel to protect the embassy.

Another blogger, Christina Siun O'Connell of Firedoglake.com, says Richardson's rivals are being dishonest.

"If we leave troops behind, you're not ending the war," she says. "Bill Richardson is the only one who would actually end the war."

Richardson has called for an immediate withdrawal of all personnel within six to eight months.

The campaign posted a longer version of the ad on his Web site on Monday. The 30-second television ad starts Wednesday to coincide with the Democratic debate that evening at Dartmouth College.

A campaign spokesman would not release the size of the ad buy.

Dean, a darling of the Web during his upstart and anti-war campaign, drew heavy support online. He tapped the then-unheard of potential for online fundraising that has paved the way for the current crop of candidates.