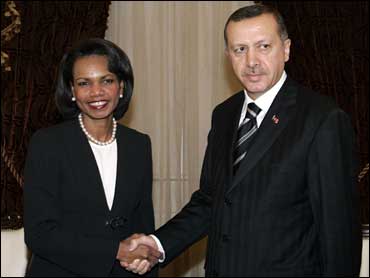 Secretary of State Condoleezza Rice assured Turkish officials Friday that Kurdish rebels based in northern Iraq were a "common threat" and that the United States would help Ankara in its fight against them.

Speaking after meeting with both Prime Minister Recep Tayyip Erdogan and Foreign Minister Ali Babacan, Rice said she had emphasized that the United States is "committed to redoubling its efforts" to help Turkey in its struggle against the rebel fighters.

En route to Ankara, Rice told reporters in her traveling party that the United States, Turkey and Iraq will counter any attacks on Turkey by the rebels.

She didn't specify just what that meant but did warn against doing anything that might worsen the volatile situation on the Turkish-Iraqi border.

Prime Minister Erdogan, meanwhile, is to meet President Bush in Washington on Monday. The Turkish military has indicated it will wait for Erdogan's return before any large-scale assault on targets inside Iraq.

Washington worries that a cross-border incursion would bring instability to what has been the calmest part of Iraq, and could set a precedent for other countries, like Iran, who also have conflicts with Kurdish rebels.

But Ankara has been resolute in saying that, unless it hears concrete measures the United States will take against the rebel Kurdistan Workers' Party, or PKK, it will launch an attack.

"We have great expectations from the United States, we are at the point where words have been exhausted and where there is need for action," Babacan said.

CBS News' Charles Wolfson, traveling with Rice, reports that the chief diplomat's trip is made even more challenging by the current chilly relations between Ankara and Washington.

"Before Secretary Rice could begin discussing the latest developments in Iraq," says Wolfson in a report filed from Istanbul. "She had to stop in Ankara for a critical round of meetings with Turkish officials."

"The Bush administration has periodically 'talked the talk' about Turkey's importance and the advantages of strategic partnership. But it has simply not delivered on matters of greatest importance to Turkey," the Brookings Institution's Mark Parris, a former ambassador to Ankara, told Wolfson.

Rice said the U.S. was looking at enhancing its intelligence and information sharing with Turkey and that she had begun talking with the Turkish leaders about longer term solutions.

CBS News correspondent Allen Pizzey reports one nation that will not be represented at the talks in Turkey, possibly to the detriment of Secretary Rice's goal of averting a cross border battle, is Iran.

"The Iranians have vested interest in helping out. They have a restive Kurdish population of their own which could be used by their enemies to create problems," says Pizzey in an analysis story on the summit. "Washington isolates Iran from the Kurdish problem at its peril."

(AP Photo/Yahya Ahmed)
South of the border on Friday, prime minister Nechirvan Barzani of Iraq's northern Kurdish region, seen at left, condemned PKK attacks inside Turkey and said he hopes the weekend summit in Istanbul will reduce the threat of Turkish military strikes.

Head of Iraq's semiautonomous Kurdistan Regional Government, Barzani issued a statement saying there was "no place in the modern civilized world" for the type of violence carried out by guerrillas from the PKK.

It was one of the harshest denunciations of the PKK by a Kurdish Iraqi official in recent weeks, and came under increasing diplomatic pressure on Kurdistan's government to distance itself from the PKK.

For the most part, Kurdistan officials have tried to remain neutral, painting the conflict as a matter strictly between the insurgent group, which has waged a decades-long war against Turkey, and Ankara. The PKK has been accused of staging attacks on Turkey from bases in Iraq's mountainous northern border region.

"There can be no excuse whatsoever for these actions which undermine peace and stability in the entire region and which are not in the interest of anyone involved," Barzani said in his statement.

The prime minister's uncle is Kurdistan's most senior leader, who took a slightly less conciliatory tone in a rare television interview several weeks ago with CBS News correspondent Elizabeth Palmer.

"If Turkey comes up with a peaceful solution, and the PKK refuses it, we are ready to do anything against the PKK. But if Turkey is using the PKK as an excuse to fight with us, we are ready to defend ourselves," Massoud Barzani said.

His words reveal a mistrust between Kurds and Turks that dates back centuries, and which now threatens to destabilize one of the few bastions or relative tranquility inside Iraq's borders.

"We have many strong ties to Turkey, both economic and cultural, and we hope to see these ties grow in the future. People on both sides of the border have come to benefit from our trade relations," he said.