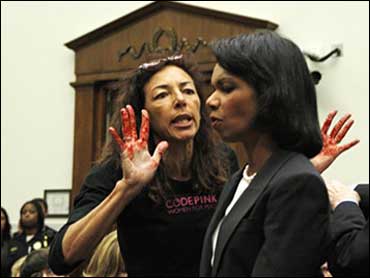 Secretary of State Condoleezza Rice was accosted by an anti-war protester with her hands painted red to look like blood as she entered the room to testify before the House Foreign Affairs Committee.

The protester shouted that Rice was a "war criminal" and should be taken to the Hague, a reference to international war tribunals.

Rice was stoic and proceeded with business as normal as the protester was immediately spirited from the room. Other protesters were likewise escorted away at the behest of Committee Chairman Tom Lantos, D-Calif.

Despite the protesters' effort to focus on the war, the Israeli-Palestinian conflict dominated much of the hearing. A "two-state solution" in the Middle East is in jeopardy after a series of events including Iran's recent efforts to support Palestinian Hamas militants, Rice said.

Accordingly, the Bush administration decided to convene an upcoming peace conference in Annapolis, Md., to keep from losing a window of opportunity, she told the House panel.

"Our concern is growing that without a serious political prospect for the Palestinians that gives to moderate leaders a horizon that they can show to their people that indeed there is a two-state solution that is possible, we will lose the window for a two-state solution," Rice told the committee.

Sharp questions included ones from Lantos on whether the Bush administration was doing enough to pressure Egypt to crack down on Hamas sympathizers and another on the question of whether Bush was calling for the peace conference to salvage his political legacy.

Rice dismissed suggestions that the conference was a political ploy.

"There are probably easier foreign policy tasks to take on than the Israeli-Palestinian conflict," she said. "The timing comes down to what it is we need to do to give moderate forces in the region a boost and to deal a blow to forces of extremism."

The conference has not been scheduled, but should happen by the end of the year, she said.

On a separate issue, Rice said an emergency State Department review found serious problems with the way private security guards operate in Iraq and that more changes to government policy for contractors may be needed.

Rice said she and Defense Secretary Robert Gates have told their No. 2 officials to do a further study. Rice has already ordered two rounds of changes to the rules for security contractors intended to install greater oversight from Washington.

On Iran, Rice said the administration shares Congress' goal of making sanctions tougher on Iran. But she urged patience among lawmakers, who are increasingly frustrated that not enough was being done to deter Tehran's nuclear ambitions.

Last month, the House passed, by a 397-16 vote, legislation aimed at blocking foreign investment in Iran, in particular its lucrative energy sector. The bill, sponsored by Lantos, would specifically bar the president from waiving U.S. sanctions.

"We are, of course, very concerned, Mr. Chairman, that the policies of Iran constitute perhaps the single greatest challenge for American security interest in the Middle East and possibly around the world, because the combination of Iranian terrorism, Iranian repression at home and the pursuit of nuclear weapons technology . . . is a very dangerous mix," she said.