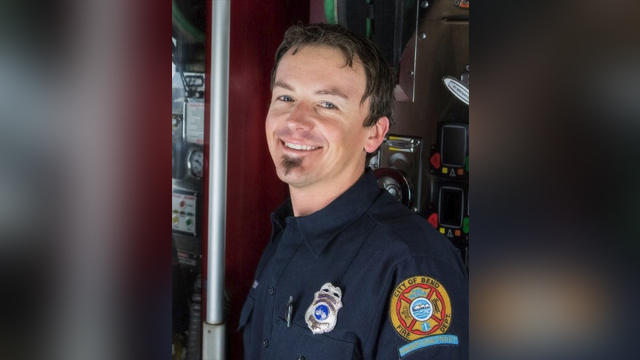 WARM SPRINGS, Ore. -- Authorities say a 39-year-old off-duty firefighter was killed when his motorcycle struck a large bear on a Central Oregon highway and he was hit by another vehicle. Oregon State Police says Rhett Larsen, of Bend, died at the scene of Saturday night's crash on Highway 26 near Warm Springs.

The Bend Fire Department on social media Sunday called the fire engineer a "respected leader" and that he is deeply missed.

Authorities say Larsen struck the bear, which also died, when it ran onto the highway. Police say Larsen was thrown from his motorcycle and hit by a Ford SUV driving in the opposite direction.

The SUV driver was flown to a hospital with undisclosed injuries. State police did not comment on her condition Sunday.

The collision closed the highway for several hours.

CBS affiliate KOIN-TV reports the Bend Fire Department said Larsen was hired in 2002 as a firefighter/paramedic. He was then promoted to fire engineer in the fall of 2016.

In a statement, the department said: "He was a creative soul with a compassionate heart, an intelligent and well-loved team player. Rhett lived life to the fullest, and he loved his work as a firefighter/paramedic."