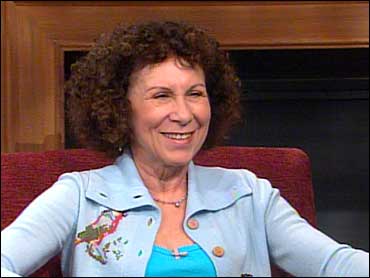 For many people, Rhea Perlman will always be remembered as the wise-cracking, but loveable waitress on the classic TV show, "Cheers."

Now though, the Emmy winner is adding children's book author to her resume.

The books' publisher, Harper Collins, says, "Otto Pillip is one amazing kid. He's a racecar driver, (racecar is spelled the same backwards as it is forwards — cool!) a talented inventor, a passionate polyglot who loves to fiddle around with words, a burgeoning songwriter, (though, not a very good singer) and as though that weren't enough, he's just learned that his parents are super secret agents who want him to join the family business!"

The books are aimed at kids of both sexes between the ages of 7 and 11.

tells
The Early Show co-anchor Harry Smith Wednesday, it's no accident that "Otto" and "racecar" plays a prominent role in one of the books.

She says she's always been a big fan of palindromes, or words that read the same backwards and forwards. So she uses them and other wordplay liberally in the books, the first two in a planned series of six.

"Now," she admits to Smith, "there's no real reason for that. It's just like I look at a word, Starbucks, and it becomes, Skcubrats."

How did she turn to writing kids' books?

"Well, it's on those days when you're not so busy!" she laughed. "Those happen. Everything goes in cycles. And I spent a lot of time telling stories to my kids when they were young. Now they're 18, 20 and 22.

"I used to tell this one story to Jake, my son, when he was little, about Jake, a racing car. It was just about him and this car that could do anything. And there were these two bad guys, Ralphie and Paulie, who always used to steal the car.

"And one day I just said, 'Let me try writing this down.' It was almost like it was an exercise for myself."

She says the books are "cartoon-ey."

"My son liked to read, but he struggled with it sometimes," she says. "He wanted to read chapters. So, (in her books), I made chapters easy to read for kids because some of (the chapters) only have one word."

After setting up a room in her house in which to write, Perlman says, she did the same in her family's beach house but found she "couldn't write a word" there because it was too quiet.

Saturday marks Perlman's 14th wedding anniversary with actor/director Danny DeVito, and they've been together 25 years in all.

"Love. Love," she cooed. "I mean, really. You know what? Who knows. The secret to success is to try to never figure that out!"

To read an excerpt of "Otto Undercover: Born to Drive," click here.