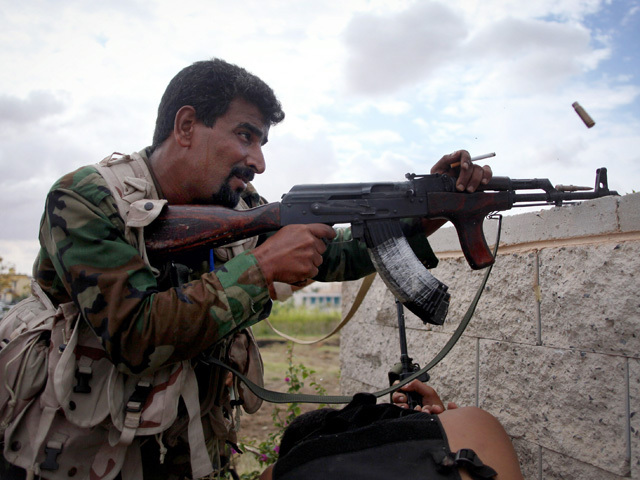 SIRTE, Libya - Being assigned to cover the fall of Sirte is beginning to have a "Waiting for Godot" feel about it. Predictions range from "a few days" to "any moment," neither of which can be relied upon, or discounted. So, every day, journalists make the run from wherever they are staying and try to get as far into Sirte as possible and not get killed.

Our first stop on the way in is "the coffee mosque." We dubbed it that because volunteers have set up stall outside a mosque on the main highway a few miles from the city, where they hand out free biscuits, tuna rolls and Arabic coffee to anyone who comes by. It's a gathering place for fighters and journalists going to and coming from the front lines, ideal for swapping information and rumours. And the coffee certainly gives a kick-start to the day.

More than a few of my colleagues have noted that this is one of the few wars any of us can remember covering where we have been made so welcome. Libyans haven't yet figured out that when foreign correspondents show up en masse, it generally means your country is in a mess.

(Watch Pizzey's report from the front lines in Sirte)

The National Transitional Council has set the fall of Sirte as the benchmark to announce that Libya is free, whether or not a few pockets of resistance like Bani Walid may still be there, and Qaddafi and key members of his family still at large. But it won't signal the end of their problems. Quite the contrary.

One sign of that is the increase in the number of apparently broken-down cars being towed away by tractors and, more often than not, two or three men in a pickup truck with an anti-aircraft gun mounted on it. The dirt tracks and breaks in walls that the rebels made as they pushed forward are choked with them to the point where a few traffic cops and road signs wouldn't go amiss. Ownership paper checks might help too, since most of the cars under tow seem to be of the higher end, like four wheel drives and cars a cut above the low-priced Hyundai and other sedans that predominate on the roads here. One day we saw two very non-farmer types using a tractor to tow a BMW.

Every day we see semis pulling open trailers filled with camels towards Misrata. They could be simply on their way to market, or they may have been re-appropriated from absentee owners. Certainly our driver and translator suspect the latter.

Whatever the case, they're better off than the four we saw grazing atop a hillock in the center of the city yesterday, overlooking the area where Qaddafi loyalists are holding out. Barely fifty meters from where the camels were calmly munching, rebels (who now prefer the term "revolutionaries,") were firing a recoilless rifle mounted on a truck. They claimed to be aiming at snipers, but there was no incoming fire, and no sign anyone was in the buildings which they could barely see through the smoke of a grass fire.

There's no sign of them today, but down on Dubai Street, a volunteer is handing out small bottles of water, while another makes the rounds of the journalists gathered there, offering aluminum foil containers of relatively hot rice and mystery meat, complete with a plastic fork. It's easier to slake your thirst and hunger than it is to fill a gnawing need for reliable information.

We were hanging out at an ambulance assembly point, videotaping casualties being triaged, when a convoy of as many as 50 pickups with the ubiquitous anti-aircraft guns and rocket pods mounted, came roaring down the road, heading towards the sea.

The madness of the dash, combined with the amount of shooting in the air, was a clear sign that they were brigades from Benghazi. The fighters from Misrata and the eastern mountains tend to be a little -- not a lot, but a little -- more disciplined when it comes to wasting ammunition in the air.

Two men in vehicle that had broken down said the force was heading to the front, because they had heard that the story of Qaddafi's son Moatassim being captured, which had provoked massive celebratory fire overnight, wasn't true. The convoy intended to enter the fray and capture him. Instead, they ended up back on Dubai Street. Maps seem to be in short supply.

An hour or so later, the corner that had been a gathering place was rapidly cleared when a sniper and someone with a few rocket-propelled grenades (RPGs) found the range.

They were apparently firing from a building the revolutionaries thought they had cleared out yesterday.

Tactics then seemed to shift from fighters moving in on the ground under cover of massive expenditure of small arms fire to pasting the area from where the fire had apparently come with tank, rocket and mortar fire. Most of it seems to be marked "to whom it may concern," rather than a specific target.

If they don't run out of ammunition first, the revolutionaries may end taking the square mile or so of Sirte where the Qaddafi loyalists are holding out by the simple tactic of reducing everything to piles of rubble.

And it's definitely about to happen as soon as...whenever.