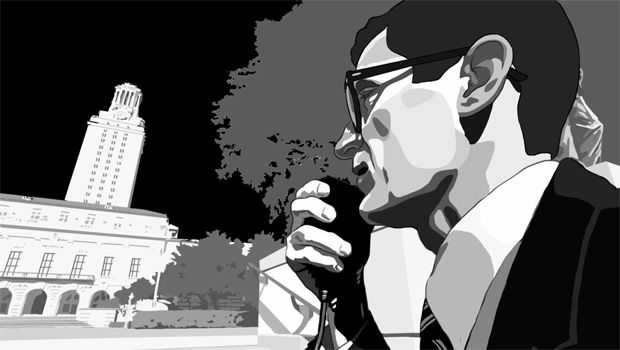 It was 50 years ago this past week that television allowed Americans to witness something that in years since has become all-too-commonplace. Anna Werner has a tale of LOSS OF INNOCENCE:

It's a summer day in Austin. Students at the University of Texas stroll the campus on a day much like the one 50 years ago ... long before anyone knew the term "mass shooting."

And it is the day and the spot Claire Wilson James will never forget. She showed Anna Werner where she was lying. In perfect view of the tower above.

A man perched atop the University of Texas Clock Tower began firing on the people below. He shot at random for more than 90 minutes.

James, an 18-year-old student who was eight months pregnant, was walking on campus with her boyfriend, Tom Eckman.

At first, she didn't know what was happening. "I never heard the shot," she said. "I just felt, like, a big jolt, and then I started falling."

As she fell to the pavement, Eckman asked what was wrong. The next thing she knew, he was lying dead next to her, and she couldn't move. "I thought I was going to die, yeah," James said.

The killer was 25-year-old Charles Joseph Whitman, a former Marine sharpshooter. Unknown to anyone, he had already killed his wife and mother in their homes before heading to the tower's 28th floor observation deck with multiple guns.

It was the first school mass shooting in modern U.S. history.

"He affected so many lives in that one day," said retired Texas Ranger Ray Martinez, who was a young officer with the Austin Police Department at the time. Arriving on campus, he couldn't believe what he saw. "When I got out of the car you could hear all that shooting -- it was like a war," he said.

Back then there was no such thing as rapid response teams. It was left to Martinez and a civilian, followed by a fellow officer, Houston McCoy, to climb to the top of the tower to face off against the sniper and his arsenal.

As Martinez described it at the time:

"He was swinging it, he didn't have it leveled at me, he was trying to bring it down, and I just kept firing."

He told Werner, "I could tell by impact that I hit him. ... McCoy shot and hit him. And he started going down."

The shooter was dead. He killed 16 people that day and injured dozens more.

The mass shooting brought fundamental changes to police departments, and led to the creation of SWAT teams used around the country.

For decades at UT, the only reminder of that terrible day was a small plaque attached to a rock in a garden.

"This is a story, I think, that anybody who grew up here has heard a little bit about," Maitland said. "But if you want to get past just that little bit, there isn't really a lot out there to kind of fill in the blanks."

So he made a documentary: "Tower." It uses animation and archival footage to tell the story of that day. "What I wanted to understand was, what was it like to live through something like this? And how would it impact you? How does it impact a community?"

To watch a trailer for "Tower" click on the video player below.

In the process, he wound up reconnecting people who, as it turned out, had never seen each other since that day 50 years ago.

People like Claire Wilson James, and Artly Snuff, who was just a teenager at the time. He ran out in full view of the sniper to pick Claire up and carry her some 100 yards, down the steps, to safety. Something, he says, he simply felt he had to do. "'Cause she was shot, and she was obviously pregnant," he said, tearing up.

Because? "The blood, the death. The horror. The loss of innocence."

Maitland said, "I think what I probably learned the most is that you have to deal with trauma. And for people who didn't give themselves an opportunity, or weren't given an opportunity, it really sits with them and kind of eats away at them over the course of the rest of their lives."

Even people you might not expect, like Ray Martinez, who -- before he was a police officer -- was a combat medic.

He told Werner that, on his way to the Tower to stop the sniper, he was forced to run past Claire, as she lay bleeding on the Quad, without stopping to help her.

"That day I was thinking like a medic, but I was also thinking like a policeman," he said. "I saw her wounded and I felt like it was my duty to grab her and take her out of there."

"In the movie version of this, you're the guy that shoots the sniper and saves the day," said Werner. "And you're telling me that even you are wracked by guilt?"

"Well, if you're a human being and you got feelings for people, yes."

The university is now taking steps to remember those lost. This past week, a new, larger memorial was dedicated, listing the names of those killed, including Claire Wilson James' boyfriend and also her unborn baby.

And in the shadow of the Tower, there is now friendship, and healing for survivors ... and, from Claire Wilson, something else: Forgiveness.

"Oh, yeah, how could -- God's forgiven me everything I've done and He's kept me from being that kind of person, you know, that decided to go that way," she said. "I mean, how could I not forgive him? I mean, he was just a really mixed-up kid."