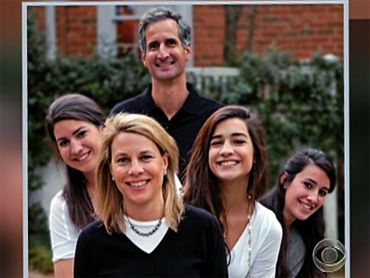 Friday night, CBS and the other major networks are joining forces once again to bring you Stand Up To Cancer - a program designed to heighten awareness of the disease and raise money to fight it.

Some of the money is funding research against one of the deadliest cancers: pancreatic. This year, more than 43,000 Americans will be diagnosed with it, and nearly 37,000 will die of it. It has already claimed the lives of people like Michael Landon, Patrick Swayze, and, yes, my sister Emily.

But now, thanks to cutting-edge research, more and more patients have reason to hope.

(Scroll Down to Watch the Video)

Howard Young was living the dream. The Atlanta beer distributor had a business he loved, and a family he cherished.

"Forty-two years old, I thought I was bullet proof," Young said. "Just felt like everything was going along great."

Then came a devastating diagnosis: pancreatic cancer - a disease with the lowest survival rate of all cancers.

"You read the statistics, Howard, when you went online after diagnosis. And you know that, what, 75 percent of pancreatic patients die within a year," Couric said.

"That's true," he replied. "I think the first website I looked at said it's a virtual death sentence."

Young had surgery, followed by chemotherapy and radiation. Doctors told him even if everything went well, he'd have a 20 percent chance of living six months. That was eight years ago, and he's still going strong.

"The good news is, there are many more Howards. And there are going to be a lot more of them," said Dr. Daniel Von Hoffof the TGEN Research Institute in Phoenix. They had already developed one of the few effective treatments for pancreatic cancer: Gemcitabine.

"It improved survival from 2 percent to 18 percent," he said.

But, he says, stubborn pancreatic tumors still manage to protect themselves against the drug because they're surrounded by a tough, fibrous cocoon.

"The idea is that we have to either prevent this cocoon from forming, or we have to get rid of it after it's formed," Van Hoff said. "We'll have a much better chance of getting the drug in."

So, at the request of Stand Up To Cancer, Von Hoff joined forces with another leading cancer expert, 2,000 miles away.

"They had the clinical expertise, we had the scientific expertise. And together, we could really make a dream team," said Dr. Craig Thompson of the University of Pennsylvania. He thinks starving pancreatic tumors of food they can use for fuel - an amino acid called glutamine - just might crack that cancer cocoon.

"We want to shut off the fuel that we think is driving the production of the cocoon, and fueling the division of the cancer cells," Dr. Thompson said.

With a grant of $18 million from Stand Up To Cancer, a clinical trial begins this month combining three drugs: one that targets the cocoon, another that targets the tumor, and a third one intended to cut off the cancer's fuel supply.

"By cutting off the fuel, by creating damage with the Gemcitabine, and by eliminating the cocoon, we're going to strip off all the defenses of the pancreatic cancer cell, and therefore kill it," Dr. Thompson said.

Two-thirds of this chemo-combo has already worked wonders for Howard Young, who has had no signs of cancer since 2009. He's resumed an active, busy life of work, golf, and most of all - family.

Young said he wants to be around for "graduations, weddings. I've got three daughters. And besides trying to find a way to pay for the weddings, I'd like to-- to attend them, too." He'd like to walk his daughters down the aisle.

Until there's a cure, the team of doctors is out to prove that "remission" is not mission impossible.

"There's an awful lot of people out there depending on us. And, we hope not to disappoint," Von Hoff said.