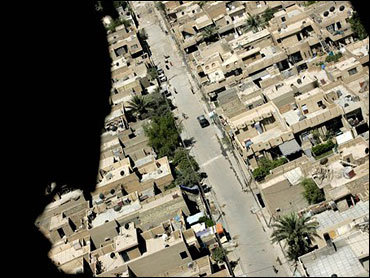 A handful of Sunni mosques were attacked or burned Thursday, but curfews and increased troop levels kept Iraq in relative calm a day after suspected al Qaeda bombers toppled the towering minarets of a prized Shiite shrine.

Wednesday's attack on the Askariya shrine in Samarra, which was blamed on Sunni extremists with links to al Qaeda, stoked fears of a surge in violence between Muslim sects. A bombing at the same mosque complex in February 2006 that destroyed the shrine's famed golden dome unleashed a bloodbath of reprisals.

The U.S. military issued a statement Thursday saying Iraqi forces had arrested the Emergency Service Unit commander and 12 policemen responsible for security at the shrine at the time of the explosions.

"We must condemn the bad actions of terrorists, and the sons of all tribes must come together and forgive each other," the military quoted Brig. Gen. Duraid Ali Ahmed Mohammad Azzawi, deputy commander for the National Police in Samarra, as saying.

Increased U.S. and Iraqi military patrols crisscrossed the streets of the Iraqi capital, and additional checkpoints were set up along roads leading to Sadr City, witnesses said.

Hundreds of residents marched peacefully through the streets of that teeming neighborhood, a stronghold of Shiite cleric Muqtada al-Sadr's Mahdi Army militia. Demonstrations also took place in Kut, Diwaniyah, Najaf and Basra — all predominantly Shiite cities in the south.

A ban on vehicular traffic was expected to remain in place in Baghdad until Saturday.

Within hours of the nearly-simultaneous blasts in Samarra Wednesday, three Sunni mosques south of Baghdad went up in flames, reports CBS News chief foreign correspondent Lara Logan, and attackers set fire to three more mosques in the capital itself.

Police in the southern city of Basra said Thursday that four people were killed and six wounded in attacks on the Kawaz, Othman, al-Abayshi and Basra Grand mosques on Wednesday, all involving rocket-propelled grenades that also damaged the buildings. Basra is Iraq's second-largest city, 340 miles southeast of Baghdad.

Four Sunni mosques near Baghdad also were attacked or burned within several hours of the Samarra bombings, police said.

One of those mosques, which had been only partly destroyed, was a target again Thursday, police said. Around 4 a.m., attackers broke into the Hateen mosque in Iskandariyah, 30 miles south of Baghdad, and planted bombs inside.

Flames from a huge explosion destroyed most of the building, and a woman and child in a nearby apartment were wounded, an Iskandariyah police officer said on condition of anonymity because he was not authorized to release the information.

Gunmen also tried to storm the nearby al-Mustafa mosque early Thursday, and exchanged fire with guards before Iraqi soldiers arrived and stopped them, police said. There were no immediate reports of casualties.

In Mahaweel, 35 miles south of Baghdad, gunmen opened fire on the al-Basheer mosque at dawn Thursday, police said. They forced guards to leave, then set fire to the mosque, a local police officer said on the same condition of anonymity. The building was partly damaged, he said.

The Samarra site contains the tombs of the 10th and 11th imams — Ali al-Hadi, who died in 868, and his son Hassan al-Askari, who died in 874. Both are descendants of the Prophet Muhammad, and Shiites consider them to be among his successors.

The shrine also is near the place where the 12th imam, Mohammed al-Mahdi, disappeared. Al-Mahdi, known as the "hidden imam," was the son and grandson of the two imams buried in the Askariya shrine. Shiites believe he will return to Earth to restore justice to humanity.

The mosque attacks Thursday come as all U.S. combat forces for the troop surge are set to be in position. With the blasts in Samarra, al Qaeda showed that it can still seize the initiative and undermine U.S. promises to provide security, reports Logan.