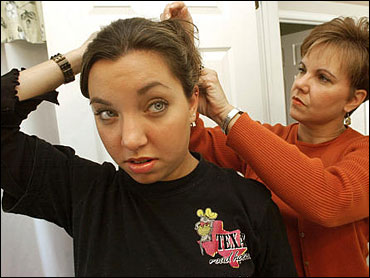 Sunshine filters through the window into her bedroom - a cozy upstairs hideaway with light yellow walls and a blue floral comforter covering a twin bed. It is quiet, even peaceful - maybe too much so for the young woman who resides here.

"It's a pretty, little room. But you kind of lose your identity in it. It's not really mine," Amy Powell says, surveying the few belongings that are hers - a laptop, a few framed photos and a weathered notebook filled with the names and addresses of the many employers she's contacted for a job.

To say that this is not what she'd imagined is a bit of an understatement: She is 22 years old, a recent college graduate, living in her parents' suburban home - and, as she puts it, still waiting to become a "real adult."

"To be honest, it's kind of depressing," says Powell, who's working as a waitress at a steakhouse while she searches for a job in journalism.

A weak economy has left many college grads and young professionals in a similar predicament, slowing their march to independence from the folks at home. But experts who track human development will tell you: The financial downturn is only the most recent factor pushing the start of adulthood later and later.

Gone is the notion that adulthood officially started at 18, when one typically graduated from high school - or even 21, the modern-day age limit for drinking alcohol.

Now many experts simply consider those markers along the way. And it appears that Americans agree. A University of Chicago survey, released earlier this year, found that most think adulthood begins at age 26.

"It's not like one day you wake up and you're an adult. It's much more gradual," says developmental psychologist Jeffrey Arnett. A professor at the University of Maryland, he is writing a book on what he calls "emerging adulthood" - the period between age 18 to 25.

"The new life course has become much more spread out and flexible," Arnett says, noting the fact that many of today's young people are staying in school longer, marrying later and delaying having children.

The University of Chicago survey found that most people defined getting married and having children as markers for true adulthood. But even that doesn't ring true for many twenty-somethings.

"I just graduated from law school, I've been in a relationship with my significant other for over seven years, and I'm buying a house - and none of that makes me feel like a grown-up," says Daniel Gluck, a 27-year-old who lives in Honolulu. "But I'm starting to lose my hair and that's beginning to make me feel grown up pretty quickly."

Others are shunning the idea of home ownership, even with the rock-bottom interest rates that have made it possible for buy property right out of college.

"I don't believe that my sense of being is dependent on what I own," says Ashley Mohney, a 24-year-old Chicagoan and avowed renter who works as a library clerk at a law firm. "I don't need a status symbol such as a house or property to feel complete or accomplished."

"That comes from my writing, playing guitar and good friends," says Mohney, an avid poetry and short-story writer outside of work.

Some young people say their hesitation about marriage, family and home ownership comes from watching how others - from parents to peers - have responded to the usual trappings of adulthood.

"I've had a glimpse into their lives and realize what a change those things represent," 23-year-old Lisa Mixon says of friends who got married and started families right after college. "Many of them always feel rushed, are too busy to go out with friends - and, well, aren't happy."

Now working as marketing director at Harcum College in Bryn Mawr, Pa., Mixon moved in with her parents after college while working a retail job. She has agreed to stay on for the next two years to help care for an ill parent and chip in on household duties.

Her focus, she says, is "to enjoy my time now, not as a complete adult - just yet."

For Powell, reaching true adulthood would be as simple as getting a job that allowed her to move out of her parents' home in Clinton Township, a large suburban area a few miles northeast of Detroit.

"I'd be in my own little apartment, in a city with a job that puts my degree to use, paying my own bills, with nobody claiming me as a dependent," she says. Marriage and children will come later.

It is a very different life than her mother had.

When her mom was 22, she was married and pregnant - and off to a Louisiana Army base with her husband, now a retired Army engineer officer.

"We had so much more responsibility at that age," says Sue Powell, now 45. Like a lot of women of her generation and those preceding hers, Sue Powell left college to get married. So as her children grew, she promised herself, "I will never let my kids do the same thing."

"We wanted them to have so many more experiences," she says as she stirs a pot of potato soup she's made for her daughter to eat before work.

But the younger Powell feels like her life is on hold. The money she earns covers her car payment and cell phone bill, though it's been a stretch since her parents recently asked her to start paying $100 toward her car insurance.

"Maybe it will be a little motivator," her mother says, a comment that draws a somewhat stunned and embarrassed look from her daughter.

Even those who have found jobs in their chosen field are feeling the pinch.

"I think this economy has stunted the meter of defining adulthood because so many people do not have a choice in whether to be financially independent or not," says Kristin Lunardini, a 24-year-old who works for a public relations firm. She will soon be moving from Chicago back with her parents in Aurora, Ill., to help pay off some bills and save money.

Whatever the factors that are causing it, much of society seems to be embracing the notion of delayed adulthood. And a whole line of increasingly common sayings are indicating a ripple effect - "30 is the new 20" and "40 is the new 30" and so on.

Elaine Wethington, a sociologist in the department of human development at Cornell University, believes the sayings have a ring of truth.

However, there is an exception, she notes: The age that women start to become infertile has not increased.

"So women really need to think how they're going to fit children in. You can't just let it emerge," she says. "You have to plan for it."

On the other end of the spectrum, she's also noticed that the parents of her students are more reluctant than generations past to let go of their children.

"I'm 53 and I remember when I went to college, my parents considered me an adult. And I was pretty much on my own and allowed to make my own decisions," she says. "Today, I think parents at some level want the child to still be dependent a little bit longer, if they're going to keep paying the bills."

Powell has definitely felt that from her own parents, especially since she's moved back home. And her mom doesn't deny it.

"I love having them here," she says of her two children, the younger of whom is still in college. "But I can tell Amy's changed very, very much. Living here - it's been difficult."

She's noticed that her daughter is sleeping a little later, probably because she's getting discouraged. She's also more standoffish, her mother says.

The younger Powell acknowledges that she gets annoyed by some of her parents' questions and suggestions.

"They say, 'Oh maybe you could work at the library and put together their newsletter' - stuff that's kind of" - she pauses for a moment and lowers her voice - "silly."

One recent weekend, her parents insisted that she not drive to visit her boyfriend, who's still a student at Western Michigan University, where she went to school. They told her she should stay home to work on more job applications.

She ended up staying home. "But I wasn't very happy about it," she says, as she drives to the restaurant where she works.

Later that evening, she displays a handful of change left by a customer as a tip.

"This is why I still live at home," she says with a dejected look.