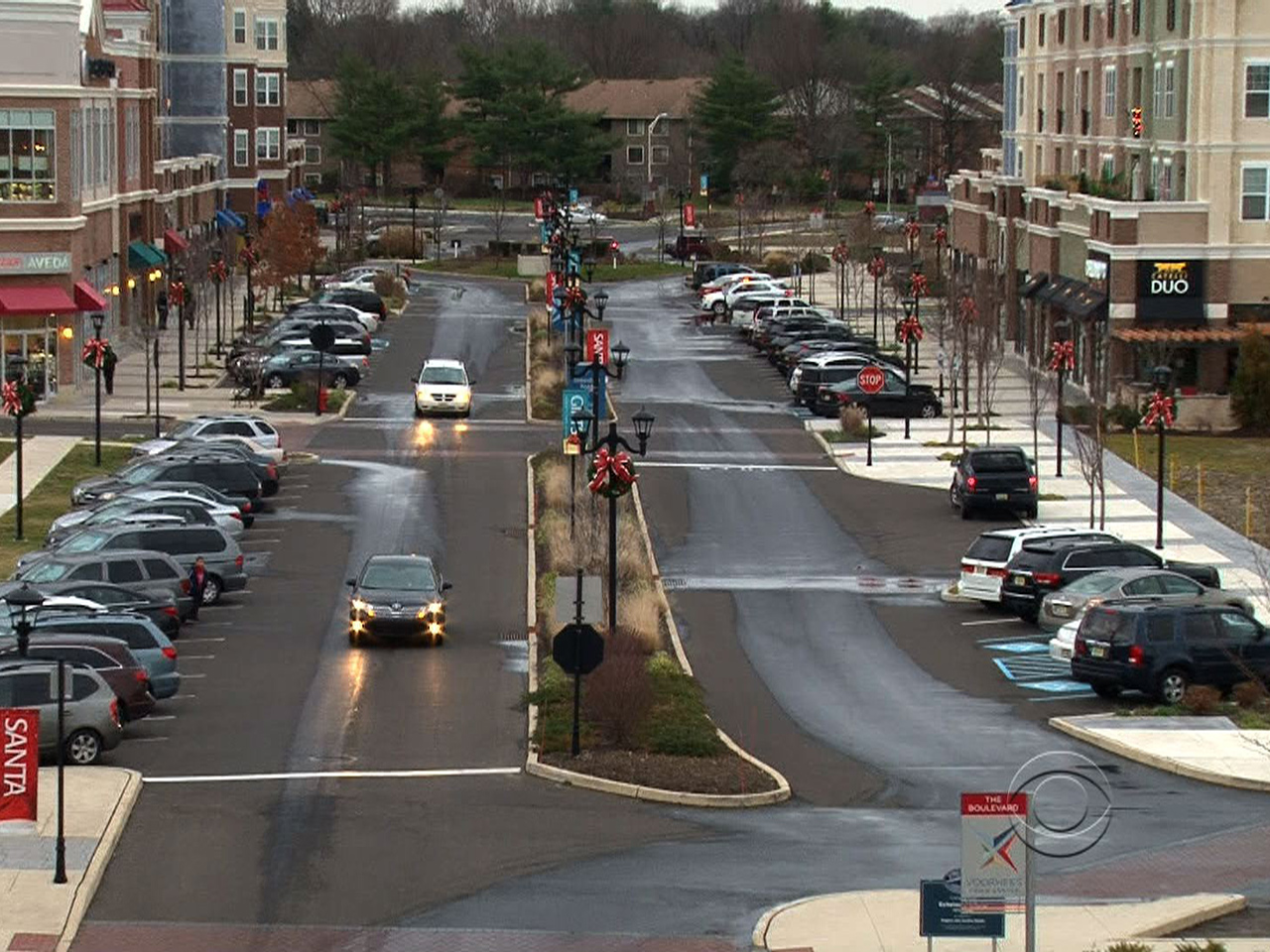 There is a growing restaurant row and a beauty school that draws hundreds of visitors every day. Residents enjoy the amenities of a sports club, coffee and yogurt shops, and a pet store.

Of 400 apartments for rent, 90 percent are occupied.

"It really is creating a sense of community and giving people a reason to come here, which is the idea we worked from in the first place," Mignona said.

Until five years ago, this suburb of 31,000 residents about 20 miles from Philadelphia had no main street.

The Voorhees Town Center used to be home to the under-performing Echelon Mall, first built on the grounds of the old Echelon Airfield in 1970, and later overshadowed by larger malls located off interstate highway exits.

So, the developer, Pennsylvania Real Estate Investment Trust, or P.R.E.I.T., decided to demolish half of the old mall, build the apartments, and create the tree-lined, pedestrian-friendly boulevard.

The town's government offices moved inside what is left of the mall. That feeds foot traffic to the remaining stores, anchored by a Macy's and a Boscov's.

"As far as I know, this is the only mall in the United States with a town hall as an occupant," said Joe Coradino, CEO of P.R.E.I.T, the nation's sixth-largest mall owner, with Voorhees and 37 malls under its control in 14 states.

"I think malls are not dead. They're evolving," Coradino said.

"This is something we're going to need to really think about in this country, these landscapes that have been paved over. How can they perform better?" Williamson said. "This is an opportunity for designers, architects, and planners to be innovative again."

In the North Atlanta suburb of Woodstock, architects from The Beck Group converted a shuttered "super Kmart" into His Hands, a mega-church with seats for 1,500 worshippers.

"There is no one formula for retrofitting suburbs or shopping malls or office parks. There are as many solutions as there are places," Williamson said.

The recent recession brought the slowdown of new mall construction in the U.S. nearly to a halt. While there are still 1,516 enclosed malls in the U.S., according to the International Council of Shopping Centers, only two new ones have been completed since 2009: The Crystals at City Center, attached to a casino in Las Vegas; and City Creek Center, in Salt Lake City, which is actually a retrofit merging two old malls into one.

About 60 enclosed malls have undergone a retrofit, according to Williamson and Dunham-Jones, who said another 120 malls have announced plans to do the same.

In Seattle, those are qualities Bert Gregory's architectural firm, Mithun, aimed for in creating Thornton Place, right next door to Northgate Mall, which had overbuilt its parking capacity.

Once unused dirt fields became the grounds of a residential community with a park, a movie theater, and a bus station nearby, all in accordance with Seattle's urban priorities of more green space and less dependence on cars.

"You can walk to get your services. You can walk to the transit stop. You're actually using physical activity to move around. That's really important for health in America right now." Gregory said. "The demographics are such that the baby boomers and the knowledge workers want to live in a walk-able community."

In Voorhees, Mayor Mignona sees his downsized mall and new downtown as a model for a redeveloping malls to serve needs beyond retail and shopping.

He said, "I like to think we were always on the map, but maybe even more so now."

COVID is leading cause of death among police officers