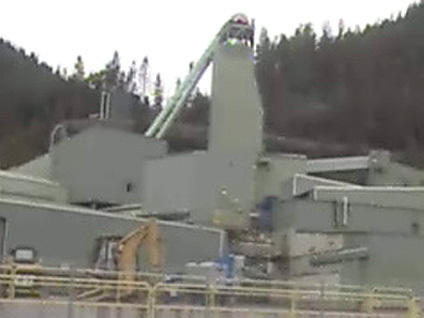 MULLAN, Ida. - Rescuers worked Sunday to reach a miner caught in an Idaho cave-in more than a mile underground even as they awaited the arrival of a remote-control digger that will allow them to tunnel more quickly and safely through unstable earth.

The roof of a tunnel at the northern Idaho silver mine collapsed as two brothers were working, trapping one of the men but the other was able to escape, according to officials and family members.

They're trying to "safely remove the material needed to access the area where the employee was working," the statement said. "We have completed 20 feet of timber for ground support, and advanced a total of 25 feet."

Hecla President Phil Baker said earlier that a remote-control "mucker," similar to a front-end loader, was being flown in from the east coast in so crews could dig away material clogging the tunnel from a safe distance.

"This will enable the removal of material without needing all the additional ground support to ensure the safety of our rescue teams," the company statement said.

Baker said the collapse at the Lucky Friday Mine occurred late Friday afternoon. The brother who escaped, whose name wasn't immediately available, wasn't injured. But there's been no contact with Marek and his condition was unknown.

A Marek family member, who spoke on condition of anonymity as per an agreement with the rest of the family, told The Associated Press that two of her brothers were in the mine; one got out and the other did not.

She said most of her family was at the rescue site. She described her family as longtime area miners, but declined to provide any more information.

The mine is tucked into the forested mountains of Mullan, a historic mining town of 840 people in Idaho's Panhandle.

Mike Dexter, another Hecla spokesman, said the two employees had just finished watering down blasted-out rock and ore when the collapse occurred about 75 feet from the end of the 6,150-foot deep tunnel. The cave-in area was 20 feet wide. Officials say it's unclear if the entire 75-foot section collapsed, or only a portion of it, possibly leaving the miner trapped on the other side.

"We don't know if the collapse went all the way to the end," Dexter said.

The company said all mining activity has been halted for the rescue effort.

The mine employs roughly 275 workers, about 50 of whom were underground in various parts of the mine when the collapse occurred, Hennessey said.

Glen Gotcher, 57, who worked in the mine for 28 years and spent the last seven working in the mill above ground, said the community is staying positive as they await word about the missing miner.

"This is something people are used to feeling, because when the rock burst happens, you can feel it all over town," Gotcher said as he gathered with other miners at the Smokeshop Bar in downtown Mullan.

Others have died in the mine, but not recently, Gotcher said.

On its website, Hecla describes itself as the oldest U.S.-based precious metals mining company in North America and the largest silver producer in the U.S. It is headquartered in Coeur d'Alene, Idaho.

Hecla currently produces silver from two mines, Greens Creek and Lucky Friday, a mine that has been operational since 1942 and is one of the nation's deepest underground mines.

Mine Safety and Health Administration officials were helping coordinate the rescue effort. So far, no cause for the collapse has been identified.

Baker said the collapse was in an area where mine material is watered down and cooled before being shipped to the next phase of processing.

"We're not yet focused on how and why it occurred," Baker said. "All of our efforts now are on rescuing the miner."

Hecla Mining has been expanding its Lucky Friday Mine in the Silver Valley, spending $200 million in recent years to increase silver production by about 60 percent and extend the mine's life beyond 2030.

The company appears to have a good record of health and safety at Lucky Friday. There have been no fatalities dating back to 2000, according to a Mine Safety and Health Administration database. The federal regulator has cited the mine for violations, but none in the last year specifically tied to the kind of accident that occurred Friday.

In 2009, the company agreed to pay $177,500 in fines for violating federal clean water laws at Lucky Friday. EPA investigators said the mine exceeded discharge levels for metals such as lead, zinc, cadmium and suspended solids between September 2008 and February 2009. Discharges flow into the South Fork Coeur d'Alene River above the town of Mullan.