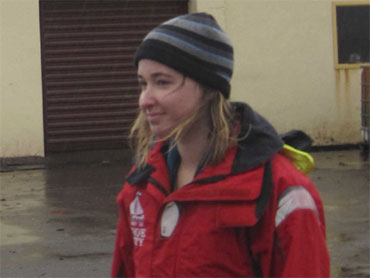 The 16-year-old California girl whose dream of sailing solo around the world was dashed by a massive wave that snapped her mast says she still loves sailing and hopes one day to circumnavigate the globe.

In an exclusive interview Tuesday with The Associated Press, Abby Sunderland also defended her parents, who have come under fierce criticism since the young sailor hit 3-story-high waves Thursday in a remote zone of the Indian Ocean.

The accident triggered a tense, 20-hour-long maritime search over the dangerous Southern Ocean and her eventual rescue by a French fishing boat.

Sunderland acknowledged that her adventure "can look pretty crazy. But the thing is, those people don't know me. And if they did, they wouldn't be criticizing my age."

She spoke by phone from the remote Kerguelen Islands, north of Antarctica, where her rescue boat stopped briefly Tuesday en route to Reunion Island and a true reunion with her family.

"I think that a lot of people are judging me by the standards they have for their teens and other teens that they know ... and thinking 'she's exactly like them,"' Sunderland said. "They don't understand that I've sailed my whole life and I do know what I'm doing out there."

"Storms and bad weather, it's the chance you take when you're sailing around the world. And I was up for it, and my parents knew I was," she added.

Last year, Sunderland's brother Zac briefly became the youngest person to sail solo around the world when he was 17. That unofficial record now belongs to 16-year-old Australian Jessica Watson, who completed her around-the-world solo sailing trip in May.

Sunderland, whose father is a shipwright and has a yacht management company, set sail from Los Angeles County's Marina del Rey in her boat, Wild Eyes, on Jan. 23. But she ran into equipment problems and had to stop for repairs soon after beginning her journey. She gave up the goal of setting the record in April but continued on, hoping to complete the journey.

She lost satellite communication with her family last Thursday, after hitting rough seas in a remote part of the Indian Ocean. Before losing contact, Sunderland had reported that her boat was being tossed about by waves up to 30 feet tall. She set off her emergency beacons and was rescued on Saturday, 2,000 miles west of Australia.

Sunderland declined to go into details about how her 40-foot (12-meter) yacht became disabled. It has since been abandoned and sunk in the Southern Ocean.

"You don't have time to be terrified. If you get terrified, things just get worse. You just deal with what you get given and make the best out of it," she said.

"I think my biggest regret is having to give up my dream, but I didn't really have a choice," she said. "I was definitely up for it and I definitely could have done it."

Sunderland said she was grateful to the crew of the French fishing boat that came out of its way to rescue her.

"I was so far offshore it's hard to get a boat out there, so it's great that there was one that close by," she said.

She was transferred early Tuesday to another French vessel, this one a fishing patrol boat, that dropped anchor off the Kerguelen Islands. The archipelago, 3,300 miles southeast of Africa, once hosted whalers and sealers and its main island was nicknamed Desolation Island.

After a brief break on island - which houses a nature preserve and a scientific research facility - Sunderland was to travel on the same ship to Reunion Island, where she is to be met by her family. That journey is expected to take five to seven days.

Despite her travails, Sunderland seemed in high spirits, calling the remote Kerguelen "a really neat little island. ... I'm glad that I did get to stop here."

When Sunderland debarked on Kerguelen, the American flag was hoisted, French officials said in a statement. While on land, she ate breakfast, called her parents and underwent a medical checkup before setting sail for Reunion aboard the Osiris, a French fishing patrol boat in the afternoon.

Sunderland was also given a change of clothes on the island, which has long served as a refuge for sailors in distress.

"I still love sailing just as much as the day that I left and I'm definitely going to keep sailing and I hope to sail around the world someday," she told the AP. "It's been a dream or a goal of mine for years. I don't know when or how I will, but I'm pretty sure I will one day sail around the world."