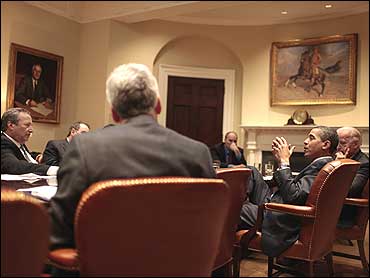 As President Barack Obama's plan to stimulate the ailing U.S. economy moves through the House, Republican opposition to massive spending increases is stiffening despite pledges on both sides to work together.

On Thursday, House Republican Whip Eric Cantor of Virginia said Republicans want a meeting with Mr. Obama to discuss concerns they have over the level of spending in the $825 billion economic recovery program.

Cantor, interviewed on CBS's "The Early Show,", said Republicans want to cooperate with the new administration to help reset the faltering economy, but that many facets of the program being pushed by majority Democrats would fail to create new jobs.

Republicans worry that much of the plan that Democrats are pushing "does not stimulate the economy," said Cantor. He singled out a provision that would spend millions to weatherize poor people's homes, saying it was a worthy goal but that it does nothing to create new jobs.

"[It] may be a good thing but why is it stimulative?" Cantor asked.

Cantor said, though, that he thought Mr. Obama's plans to include tax cuts for middle-class Americans was "in the right direction." Congressional officials said a meeting with the president was planned for next week.

Meanwhile, Mr. Obama's plan to award a $500 tax credit to most workers is expected to advance through a key House panel as Democrats prepare his $825 billion economic recovery plan for a floor vote next week.

At the same time, Timothy Geithner, Mr. Obama's nominee to become treasury secretary, was expected to win approval by the Senate Finance Committee on Thursday, despite acknowledging "careless mistakes" in failing to pay $34,000 in payroll taxes. His confirmation by the full Senate is expected soon.

The plan being considered Thursday by the tax-writing Ways and Means Committee also would provide a temporary $2,500 tax credit to help pay for college. It would boost the earned income tax credit for low-income workers and permit them to receive the entire $1,000 per child tax credit as a refund in 2009-10 if they make as little as $8,500 a year and wouldn't otherwise qualify.

The panel would also provide $29 billion in tax cuts for businesses to invest in new plants and equipment and permit money-losing businesses to claim refunds on taxes paid up to five years ago, during profitable times. A raft of tax cuts to encourage the production of renewable energy are also in the measure.

On Wednesday night, a key piece of Mr. Obama's recovery program advanced through the House Appropriations Committee on a 35-22 party-line vote. The sweeping $358 billion spending measure blends traditional public works programs such as road and bridge construction and water and sewer projects with new ideas such as upgrading the nation's electricity grid and investments in health care information technology systems.

"This package is no silver bullet," House Appropriations Committee Chairman David Obey, a Democrat from Wisconsin, cautioned. "What it is aimed at is staving off the worst aspects of this recession. ... I don't know, frankly, if it will be adequate."

The sprawling spending measure came under attack from panel Republicans, who said it would flood federal agencies such as the Energy Department with money they can't spend efficiently. They also questioned whether many of the other items in the bill would create jobs, such as $650 million to help people who get their television signals from local broadcast stations adapt to the conversion to digital signals.

White House budget chief Peter Orszag responded to criticisms stemming from a Congressional Budget Office analysis that the measure would not inject much infrastructure spending into the economy in the next several months. Orszag, who resigned from CBO the join the administration, said $3 of every $4 in the package should be spent within 18 months to have maximum impact on jobs and taxpayers.

The maneuvers illustrated Mr. Obama's governing predicament: his desire to move swiftly to confront the troubled economy while living up to a vow to break the traditional partisan barriers.