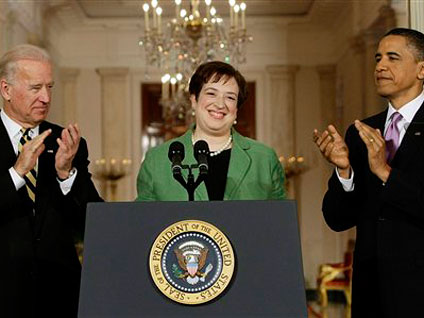 When President Obama nominated Elena Kagan to the Supreme Court two months ago, her confirmation was seen as a slam dunk. But that was nearly two months ago.

Now, with opinion polls showing a weakened president and critical midterm elections looming -- and with a steady stream of documents from past jobs showing Kagan taking predictably liberal positions -- Republicans are poised for a fight.

Alabama Sen. Jeff Sessions, the ranking Republican on the Judiciary Committee, said on Sunday's "Face the Nation" that Kagan has "serious deficiencies," citing her lack of judicial experience and her positions on a number of social issues.

"I think her nomination has real problems that need to be examined," Sessions said.

As her hearings get underway Monday afternoon with opening statements, Republicans made clear they have several lines of attack.

Mr. Obama said he tapped the 50-year-old Kagan for her keen intellect, her leadership skills and her ability to build consensus on a deeply divided Court of four conservatives, four liberals and swing justice Anthony Kennedy in the middle.

After teaching at the University of Chicago Law School, she went to the Clinton White House, then returned to Harvard, which she attended as a law student, as dean. There, she won approval from conservatives by hiring bright young scholars on the Right. One, Jack Goldsmith -- a former Bush Administration official -- will testify in her favor at her hearing.

Administration officials say she brings a formidable intellect, along with bipartisan support, to the witness stand.

"We hope that members of the committee and the Senate will pay attention to views of conservative legal scholars and practitioners," said one senior administration official last week. "Some of the leading legal scholars in the country have said, 'yes, she is qualified and would be a great addition to the Supreme Court.'"

They note she also got the highest rating from the American Bar Association. With 59 votes in the Senate, Democrats say she will undeniably be confirmed.

But that same argument was made by Justice Samuel Alito's supporters when he was nominated by President Bush in 2005. Alito was widely viewed as intellectually qualified and, as an appellate court judge, highly experienced. He too got the ABA's highest rating and had significant support from liberals -- including his liberal colleagues, who said he was intellectually honest, didn't have an agenda and was not an ideologue.

Nonetheless, then-Senators Barack Obama and Joe Biden, as well as current Judiciary Committee Chairman Leahy not only voted against Alito's nomination -- they also tried to mount a filibuster to block it.

On "Face the Nation" Sunday, Leahy deflected a question about the Democrats' shaky grounds for complaints about a possible Republican filibuster of Kagan, in light of their attempts to block Alito. Their efforts in 2006 were "symbolic at best," Leahy said.

Also on "Face the Nation," Sessions refused to rule out a filibuster, saying it was "conceivable."

"If things come out to indicate she's so far outside the mainstream, it's conceivable a filibuster might occur," Sessions said.

But like Leahy, Sessions had a different approach when Democrats were filibustering George Bush's judicial nominees. Back then, he called a filibuster a "very grim thing." In an interview with the NewsHour's Jim Lehrer in 2003, he said it "should not occur."

On Face, Sessions also tried to dismiss the past, saying, "we just have to live with the world we're in." He said a group of Senate leaders had subsequently agreed that filibusters would be used only in "extraordinary circumstances."

"I've never filibustered a Supreme Court justice," he said. "I hope I don't have to."

Sessions said the hearings will be pivotal. Kagan herself has ratcheted up the pressure on herself, calling the confirmation hearings a "charade" in a 1995 law review article. Leahy said he'd talked to her about that. White House officials say she will be more forthcoming than nominees in the past.

Republicans also will hit hard on Kagan's efforts to limit military recruiting when she was dean at Harvard Law School.

They also will highlight her time working as a domestic policy adviser for President Clinton, where she worked at the intersection of law and policy. Her e-mails and memos reveal a strategic legal thinker, but Republicans say they also show she was overtly political.

Another issue will be her memos as a law clerk to Justice Marshall in 1987-88. In those memos, she tackles a number of social issues, and writes about them in personal terms.

In one memo to Marshall about a case involving a prisoner who wanted the state to pay for her to have an abortion, for example, Kagan worried that the conservative-leaning Court will use the case to rule against the woman and "to create some very bad law on abortion."

She also expressed strong views in a desegregation case.

In a challenge to a school busing plan, Kagan called it "amazingly sensible." She says state court decisions upholding the plan recognized the "good sense and fair-mindedness" of local efforts. "Let's hope this Court takes note of the same." Three years ago, the Supreme Court struck down a nearly identical plan as unconstitutional.

And in a case challenging the District of Columbia's handgun ban as unconstitutional, she said bluntly: "I am not sympathetic." (Read more from the memos here)

On Monday, only hours before her nomination hearings are set to begin, the Supreme Court is expected to rule on another on handgun case.

Taken together, those documents will be much harder for her to explain away than other, less controversial papers unearthed before her confirmation hearings for solicitor general. At the time she said she was a "27-year-old pipsqueak, and I was working for an 80-year-old giant in the law, and a person who, let us be frank, had very strong jurisprudential and legal views."

But Republicans say the documents show Kagan -- even as a pipsqueak -- held strong liberal views herself.

Also expect Republicans to raise sharp questions about Kagan's lack of judicial and courtroom experience. Kagan has argued ONLY six cases before the Supreme Court. But in those cases, she was confident and agile, sparing easily with the justices -- especially conservative Justice Antonin Scalia.

Her biggest case was defending campaign finance reform laws -- she lost -- but Mr. Obama used the Court's decision -- which will allow corporations and unions to spend unlimited amounts on campaign advertising -- to take a swipe at the conservative-dominated Supreme Court. He said the Court was allowing corporations to drown out the voices of everyday Americans.

Democrats will continue that narrative this week, as they use these hearings as a chance to appeal to voters. They will argue the Court, led by conservatives and a Bush nominee, is in the pocket of big business, and that Kagan is someone who understands everyday Americans -- like the president who nominated her.